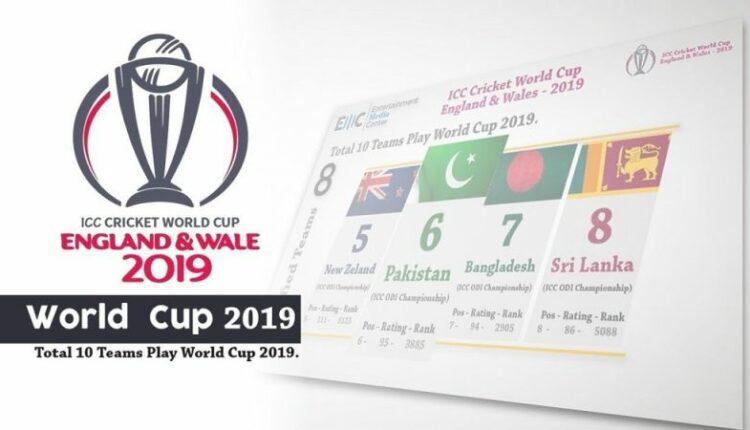 2019 Cricket World Cup Format, Venues and the stadiums, The 2019 cricket World Cup will be held in England and Wales as they obtained the rights in 2006. 10 teams competing for the ICC World Cup trophy.

The format for 2019 cricket world cup would be slightly different from the previous tournaments because of the reduced number of teams being the core reason.

Also, ICC is looking to ensure there are no dead rubber games in the tournament as it reduces the interest and affects the tournament financially.
ICC has used a variety of patterns in previous world cups but now, as the number of teams is less, the pattern will be simpler in 2019 ICC world cup.

There would be only a single central group of all the teams where each team will play with the remaining teams. So there would be a total of 45 matches to be played in this group stage before the finals.

The quarter-finals stage has been removed because of the extended group stage and as such the 4 teams winning in the group stage would be directly playing in the semi-finals with the remaining 6 teams being knocked off.

The winner of each semi-final will advance to the finals.And the winner of the final match would be declared the world champion.

VENUES FOR THE 2019 WORLD CUP MATCHES

The fixtures for the 2019 world cup are not fixed yet but some of the venues for the tournament are already known. The so-called home of cricket, LORDS will host the finals of the world cup while THE OVAL will be occupied for the opening ceremony of the tournament.

The EnglishCricket Board has announced that the semi-finals will be played at Edgbaston and Old Trafford. The remaining games will be played across England and Wales in stadiums that meet ICC’s ground conditions and requirements.
Although the list of stadiums hasn’t been declared officially, it is sure that most stadiums will host more than one match each.