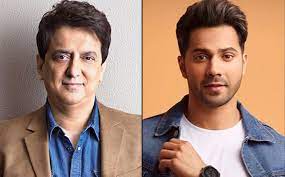 Earlier collaborations of Varun Dhawan and Sajid Nadiadwala have brought glory to both the collaborators. While the actor won hearts with his acting skills in Judwaa 2 and Dishoom, the director-producers received the acknowledgment too. Now the duo is going to come up with a thriller generic movie. Let’s dive into the information we have so far.

The third venture of Sajid Nadiadwala along with Varun will be a remake of a Tamil thriller movie Dhuruvangal Pathinaaru. The Hindi version is entitled Sanki and follows the same screenplay. It is to be said that Sajid Nadiadwala brought the rights to remake the South Indian thriller.

The lead role of a handicapped cop will be played by Varun Dhawan. To the actor, the role will be a little different from his past roles. This will be the first time that Varun portrays a physically challenging role on the silver screen in his career. Besides, fans are thrilled to know that Varun will be portraying a very different and fresh role.

The film will totally feature the same plot of Dhruvungal Pathinaaru on a pan-India level. While Varun being the male lead is a confirmed decision, the female lead is still a guess. But as per the rumors, Parineeti Chopra will work opposite Varun Dhawan in the film.

For now, the film is said to hit the filming after the actor gets off his previous commitments of Jugg Jugg Jeeyo and Bhediya. If things go as planned, then Sanki will roll on from this year. So keep your fingers crossed as the collaboration of Sajid and Varun has never been worth a miss and including a superhit Tamil storyline is not a joke. Till further update, see what movie will mark the debut of Sunny Deol’s younger son Rajvir Deol. Stay tuned for more such news.