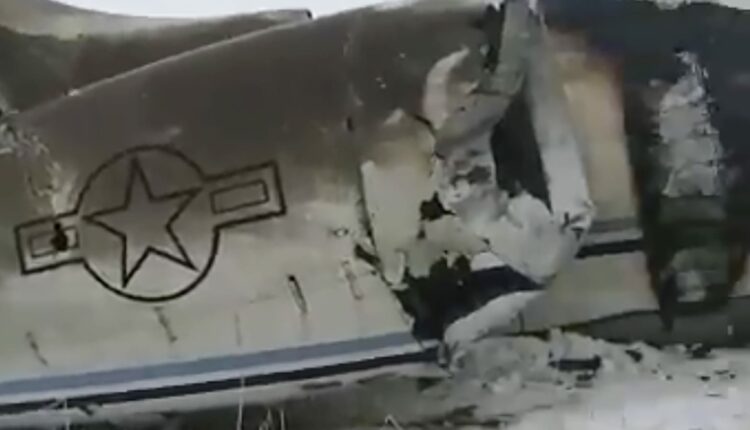 On Monday, a small US Air Force plane crashes in Afghanistan’s Taliban-held area in the Ghazni province which lies south of Kabul. The number of people on board is yet to be disclosed but according to an Afghan official two pilots were found dead in the wreckage.

Zabihullah Mujahid, who is a spokesperson for the Taliban said that they shot down “an American invader jet” killing many officers. He further claims that the plane had high-ranked CIA officers on board. But none of the above claims was verifiable.

Arif Noori who is the provincial government spokesperson said that the aircraft seemed to be flying around 321 kilometres between Kandahar in the south to Kabul in the north. Noori further added that bodies of two pilots were found amid the crash debris and said that the plane is completely destroyed but he mentions no other casualties.

Though it has been reported that only two bodies were found, locals claim to have seen around five bodies in total. On the other hand, the Afghan government initially claimed that a passenger jet crashed that had more than 80 people on board but they later retracted.

There are several unverified images of the crash circulating through social media which includes a tail end of a crashed aircraft that had the US Air Force insignia. The US Air Force uses the E11A, which is made by Bombardier. It has a twin-engine made for flying command as well as a communications hub.

It is not surprising if the Taliban claims to shoot down this plane as it has been reported from time to time that the Taliban possesses anti-aircraft weapons which are claimed to have been supplied by CIA to fight 1980s Russian occupation. In 2007, a British Chinook helicopter was suspected to have been shot down by the Taliban using a shoulder-mounted surface to air missile.

Los Angeles Lakers fans are distraught as they pay tribute to the basketball legend, Kobe Bryant and His Daughter Gianna