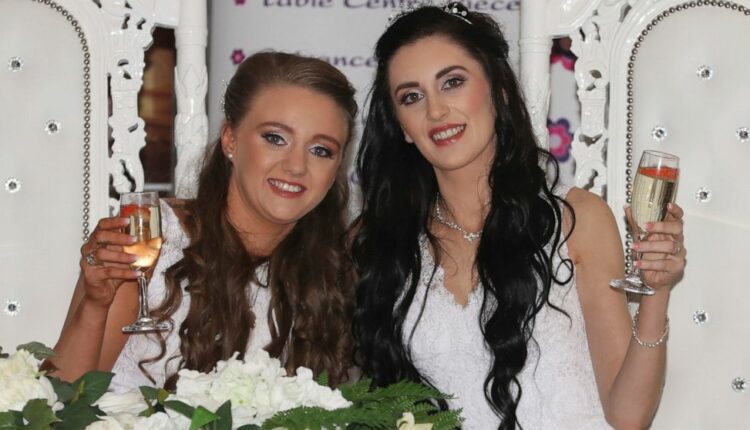 On Tuesday, the first same-sex wedding happens in Nothern Ireland after two women tie a knot making this region of the United Kingdom’s last region to legalize gay marriages. Robyn Peoples, 26 who is a care worker and Sharni Edwards 27, who is a waitress got married in a ceremony in Carrickfergus which is near Belfast.

The couple said that they did not plan to marry each other but they seized the opportunity to make their love become the symbol of change in Northern Ireland. Robyn mentions in her statement that they fought for this opportunity for so long and now that they are here it is amazing. The negotiation signified that they were equal to a man and a woman and that their love is just the same not different. Both of them took their married name to be Edwards-Peoples.

The Northern Ireland legislature decided not to allow same-sex marriage passed by the British and Scottish parliaments in 2014. This legislation faced the most opposition from the conservative Democratic Unionist Party which is the biggest group in the Northern Ireland Assembly. But after several campaigns by groups that support equal rights, British Parliament planned to step in and make the legislation the same for the whole country.

This magnificent change took effect on 13th January and the weddings were allowed to begin four weeks later. Lawmakers from the UK took the opportunity and acted quickly when Northern Ireland’s regional assembly got suspended because of the problems between main Irish nationalist and British unionist power-sharing parties. This power-sharing administration finally got restored last month after a three-year-long break.

Even if Northern Ireland wants, they cannot just change the law that was made by the London parliament. Not only same-sex marriages, but British lawmakers also voted for access to abortion in Northern Ireland as it is highly restricted.

Among the few people who campaigned for the cause was Sara Canning who partnered with Lyra McKee, a journalist who got killed during gunfire by Irish Republican Army dissidents as she was reporting anti-police riots in April 2019. No one has been charged with the killing but according to the police statement, four men were arrested from Derry. Canning believes that the first same-sex marriage is indeed a wonderful moment in Irish history.

Black Mirror Season 6 Release Date, Cast and many more that you need to know

India has sent vaccines to 20 countries in the world, sent more than 20 million doses…