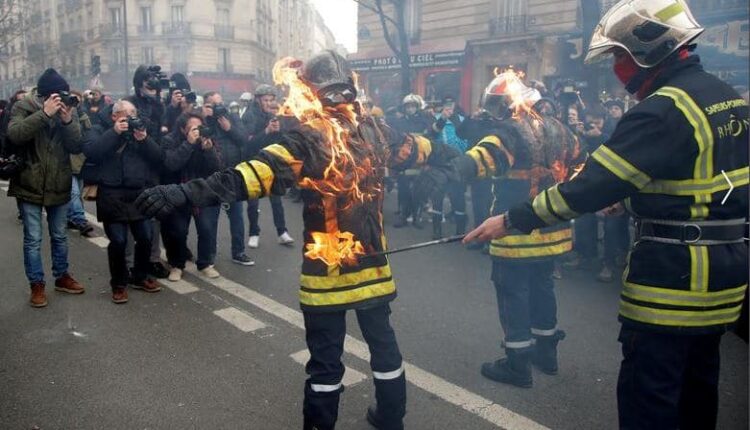 On Tuesday, thousands of firefighters marched through the streets of Paris to protest against the government’s recently announced pension reforms. Some were even bold enough and set themselves on fire to display of anger. These firefighters rejected President Emmanuel Macron’s proposed government pension system. Their demands include maintenance of staff levels, receive a premium that would reflect the risks they take at work and keep the old pension system.

Frederic Perrin the head of the union SPASDIS-CFTC, said that they are the final link in the chain of emergency aid in France and they are usually overwhelmed by callouts which refers to the fact that in France firefighters usually respond to general emergency calls. He even says that they require staffing and means to respond with a guarantee that they can just concentrate on their core missions and not serve to fill in the gaps left by absent health services.

According to Reuters’ reports, the workers were in their uniform some even clashed with the riot police who even fired tear gas at crowds. Several accounts also claimed that security forces hit few protestors with batons. A video of a firefighter under flames that have charred their uniforms goes viral on Twitter. They were under flames for around 15 seconds before one of the other firefighters sprayed themselves with a fire extinguisher.

Macron’s overhaul of the government pension system would bring in 42 currently existing pensions schemes and bring it under one single system. According to a Paris-based Journalist Cole Stangler, this would be the deepest overhaul of the country’s pension system since its birth after the second world war. Though it could save money, critics say it would hurt France’s retirement system which currently is the best in the world (93 per cent of old people in France are secure from poverty which is the highest in the European Union). the reforms would also increase the minimum age from 62 to 64.

Over the last several years France has witnessed strikes and protests along with the popular yellow vest movement. In December 2019, the strikes even added workforce from students and teachers to truckers, judges and nurses. Macron has been criticised severely as he cut unemployment benefits in 2017 and replaced it with wealth tax along with a property holdings tax that would benefit the super-rich. Just before the new year, he vowed to drop this proposal but later he said that it would be carried out asking people to cooperate.

Dwayne Johnson embedded a special message in an Instagram video, talking about his father’s disease and death