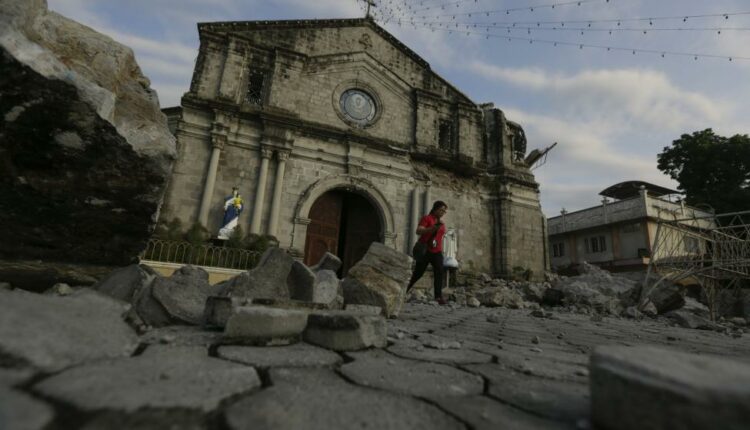 A Hefty earthquake of magnitude 6.4 struck the southern Philippines on Wednesday night. Dozen of peoples, along with infants, lost their lives, Numerous buildings such as college, residence areas observed cracks.

On the island of Mindanao, where the earthquake struck, Government authorities were discovering the reports from field officials opening cracks in buildings and homes, sending residents running from shops and offices, and knocking power out.

Reuel Limbungan, mayor of Tulunan town in North Cotabato province, told the DZMM radio station, stated that  “Our hospital chief reported that a child died because of the earthquake,”  he further added that “Two more people were injured.”

Quake smacked off Davao City, the hometown of President Rodrigo Duterte, and among the most populated cities in the country.

“Many houses were damaged… Another person is in a critical condition,” Allada said.

The United States Geological Survey stated that the quake struck 69 km (43 miles) north-northwest of the city of General Santos, Mindanao, at 7:39 p.m. (1137 GMT). The epicenter was about 80 km southwest of central Davao.

“We felt a powerful jolt, and there was a blackout. I saw people rushing down. We were panicking, heading to the exit,” said Naru Guarda Cabaddu, a hotel consultant visiting Kidapawan City, between the epicenter of the quake and Davao.

The Philippines is on the geologically active Pacific Ring of Fire and experiences frequent earthquakes.

The Philippines, one of the world’s most disaster-prone countries, has frequent earthquakes and volcanic activity because it lies on the Pacific “Ring of Fire,” a seismically active arc of volcanos and fault lines in the Pacific Basin.

“I was driving back home when I felt a mighty shake. I stopped and saw people and patients running out of the hospital,” Raprap Rafael, a resident of Kidapawan City, told Reuters. “I’m not sleeping at my home tonight.”

Renato Solidum, head of the Philippines seismic agency, told the ANC news channel there was a chance of aftershocks, which could be strong and capable of causing severe damage.

“Aftershocks can happen. Some can be felt most likely in low intensities. But we cannot remove the possibility of similar intensities that can be felt in the epicentral area,” he said.

India has sent vaccines to 20 countries in the world, sent more than 20 million doses…