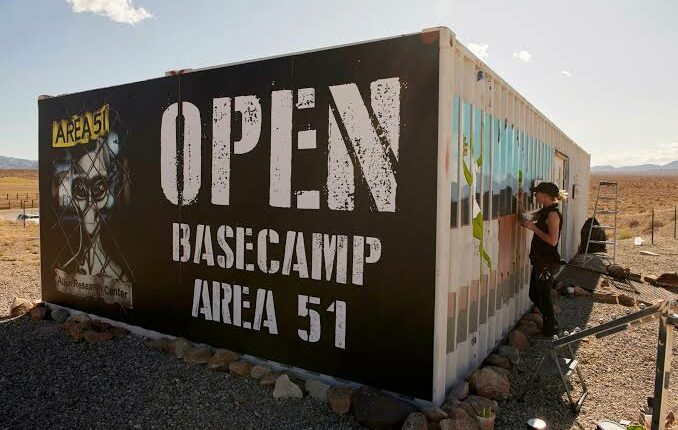 Storm Area 51, They Can’t Stop All of Us is a Facebook event where over 2 million people have responded “going” and 1.5 million “interested” on the event’s page. The event’s description declared as “Let’s see them aliens”, the alien technology could finally be disclosed to the public. This event is now making headlines all over the world and has become a viral sensation.

But why Area 51 grabbing so much attention?

The base was established in the 1950s as a test facility for the US spy plane named Lockheed U-2 reconnaissance aircraft. The site is officially called the Groom Lake or Homey Airport.

But interestingly, no-one knows what is currently going on there!!

A lot of secrecy and conspiracy theories has fueled fascination among people with respect to extraterrestrial life, UFOs and aliens, thus giving rise to events. Also, there are a lot of military warnings which clearly states to not to approach the protected site.

Michael Ian Borer, a sociologist who researches paranormal activity describes Area 51 as a phenomenon which has given a perfect blend of interest in aliens along with supernatural, government conspiracies and which fuel the desire to know what we don’t know.

How did this all happen?

The page was developed to host a variety of memes and jokes that sarcastically riffed on aliens and the secrets of the government. Thus, in short, it was developed in a comedic manner and so as the event which began as a joke. But soon, the event and the page got unexpected attention and became very serious indeed.

A student from Bakersfield, California, 20-year-old Matty Roberts told the BBC, “I posted the Area 51 Facebook event at about 2 am on June 27 and was totally a joke from the get-go. There was just a tonne of attention out of nowhere and it was awesome”

A real estate investor Art Frasik, from Ohio, told the BBC that he and others were determined to enter, expose and embrace the discovery of the aliens as American tax dollars funds this facility and it’s our right to see it after 70 years of hiding alien technology from the world.

Elected officials have signed emergency declarations. US Air Force warned people not to try to enter the Nevada Test and Training Range, the place where Area 51 is located.

Near the once-secret military research site, the two tiny towns of Hiko and Rachel where tens of thousands of people are expected to gather for two music festivals, Alienstock in Rachel and Storm Area 51 Basecamp in Hiko, featuring music, speakers and movies.

A resident Joerg Arnu worrying for the safety of other residents and visitors, told FOX5, that the infrastructure in Rachel, is non-existent. Rachel is a town where the makeshift festival has been set up. There’s going to be a lot of very unhappy people as they won’t find what they’re expecting. It will get cold at night and protection against critters, snakes and scorpions is questionable. Even the highway is not designed for that amount of traffic, the town will currently face.

Lincoln County Sheriff Kerry Lee said about more than 150 people had got close enough to get a selfie with the gates to the secret military base, but no arrest has been made. As the place is public land, the people are allowed to go to the gate, as long as they don’t cross the boundary.