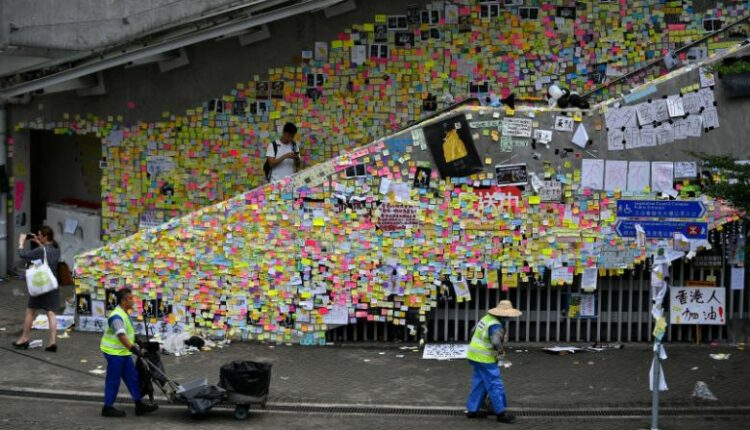 On Friday, seven people were arrested along with an off-duty Hong Kong police officer as they tried o put pro-democracy posters on a footbridge in Tuen Mun. This is the first-ever known case where a police officer faced an arrest for supporting this massive protest going on for seven months arresting more than 65, 000 people.

At 3:00 am on Friday, the officer who was 31 years old along with seven other people aged from 14 to 61 were arrested in Tuen Mun which is a district in northwest Hong Kong. According to the police statement, they were accused of possessing objects with an intent to vandalize or destroy properties along with a suspicion of trying to attempt damage a footbridge. The police said that the group possessed things like posters, plastic scrapers, gloves and electric drills. All the eight are still held in detention for further investigations as of Friday night.

According to local media reports, the group aimed to build something like a “Lennon Wall” by using collages of pro-democracy visual art which were now in trend in the past few months on walls and roads across the city. The police say that the force has an attachment of great emphasis on its members’ professional ethics and any violation of law by a fellow police officer must be handled in a serious and just manner.

Among the thousands of people who were arrested during protests around 41 of them were civil servants including 24 being from disciplines like the fire services. No police officers were arrested though there were several complaints against police personal of blinding some protestors, driving motorcycles into a march and showing a reporter’s ID card to a camera on a live broadcast.

Carrie Lam who is the city’s chief executive and a pro-Beijing appointee on Thursday said that she would not accept any complaints or accusations of police brutality or that the force had been smeared. The protests began by a trigger proposal to allow extraditions to mainland China in early June which have now evolved into a much larger revolt against China’s control over the semi-autonomous state of Hong Kong. There were several violent clashes between protesters and riot police.

Uttarakhand Stations To Replace Urdu With Sanskrit On Railway Signboards