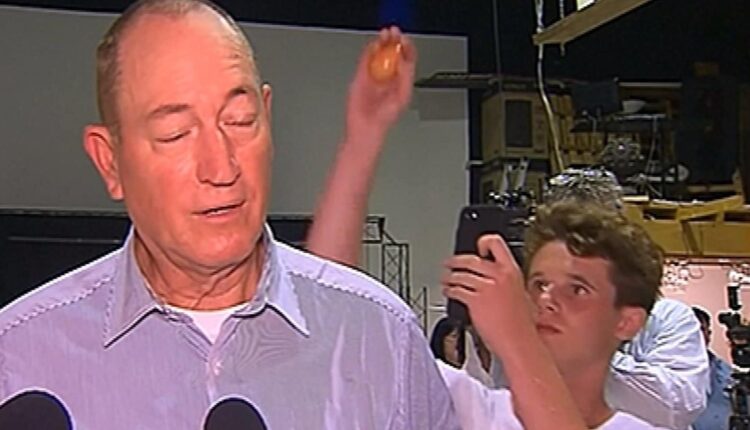 An anti-immigration senator, Fraser Anning, who has been criticized for his comments on New-Zealand shooting was smashed with an egg by 17-year old teenager in Australian city of Melbourne on Saturday.

Facebook footage of the incident shows Mr Anning talking to reporters while teenager smashes the egg from behind, the furious senator swiftly turns punching the boy twice in the face. Supporters present at the event held the boy down until police intervened. He was only left when mediapersons tried to interfere. The supporters are heard saying clearing out the media in wake of the situation.

Later police said it took 17-year old boy, identified as William Connolly, in custody but left him without filing a case. Politicians and social media continued with criticizing senator for his outrageous comments and accused him of supporting white-supremacy.
In a statement Mr. Anning clearly blamed muslims saying, “only this time they’re the victims, most of the time they’re the perpetrators” In the immediate wake of attck his Twitter he blamed immigration policies allowing muslim fanatics to enter New Zealand was the cause for the attack.

Leaders including Australian and New Zealand prime ministers criticized Australian far-right leader calling out his remarks on attacks. “These comments are appalling and they’re ugly and they have no place in Australia” said Scott Morrison according to Australian Broadcasting Corporation (ABC). “They were a disgrace” said Jacinda Ardern, PM of New Zealand.

The Australian senator was in controversy last summer when he invoked Nazi euphemism for genocide and termed it as final solution to immigration problem and to stop all muslims entering Australia.
A GoFundMe page was started online for ‘egg boy’ which immediately crossed $40k funding for paying off his legal fees and also to buy “more eggs”. The teenager’s Twitter account appeared to be suspended multiple times for unclear reasons. In a tweet William advised his followers to not egg politicians as he learnt the hard way by physically being held down by bunch of supporters.

JEE Main Admit Card 2019 to be released on jeemain.nic.in: All you need to know

Microsoft introduces Email in 15 other Languages