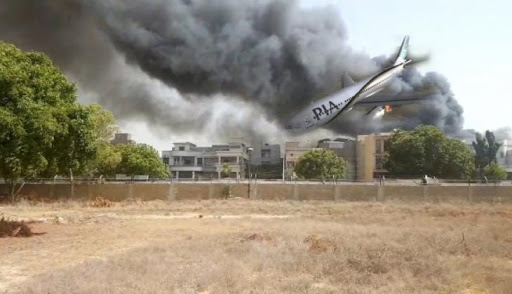 Plane crash updates: PIA flight got crashed a few kilometres from the airport

The runway was empty for the flight to land but the pilot told the control room that they have lost the engine. Initially, the plane hit the mobile tower first and then was crashed over homes. 15 homes were damaged in this crash and the plane crashed just a few kilometres from the Airport. The engine caught fire before the plane was crashed.

On Friday afternoon, the Pakistani Airline Company PIA’s plane got crashed. It had 98 passengers on board including the crew members. The plane took off from Lahore around 1 pm and at 2.33 pm, it was around 275 feet high. Till now 57 deaths have been confirmed by the officials including a 5-year-old child and a senior journalist Ansari Naqvi. But the deaths are not confirmed to be of all passengers,i.e., some dead bodies may include local residents.

6 huge plane accidents in the past 10 years

1) 28 July 2010 – The private plane of AirBlue (AirBus 321) flew from Karachi and crashed in mountains while landing in Islamabad and all 152 people on board died.

2) 5 November 2010 – After taking off in a while, a twin-engine plane was crashed in which an employee of an Italian oil company was present. 21 people died in this crash.

28 November 2010 – The cargo plane of a Georgian airline was crashed in which 12 people were dead.

20 April 2012 – A Bhoj Airbus 737’s aeroplane was crashed in which 128 passengers including the crew members were dead.

5) 8 May 2015 – Pakistani Army’s helicopter was crashed in Gilgit in which 8 people died including the ambassadors of Norway, Philippines and Indonesia along with the wives of Malaysian and Indonesian Ambassadors.

6) 7 December 2016 – 48 passengers including crew members died when an aircraft from going to Chitral from Islamabad.