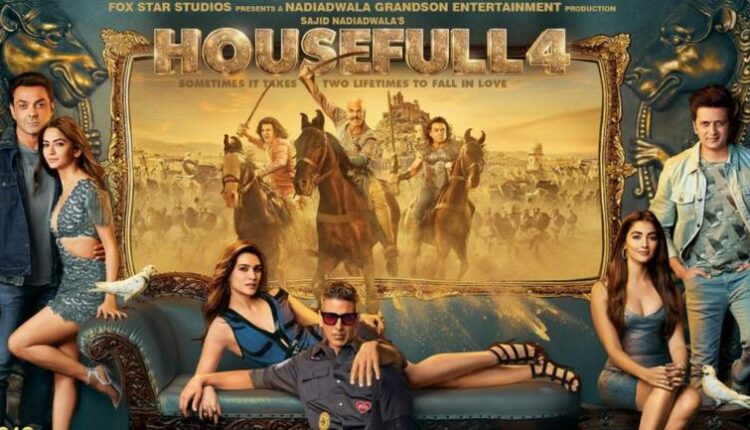 Akshay Kumar starrer Housefull 4 is the biggest festival release this year but unfortunately has fallen prey to piracy website, Tamilrockers. And on top of that, the Housefull 4 received a barrage of criticism from several film critics. Even Akshay Kumar two big releases- Mission Mangal and Kesari witnessed the same. The film is available online free to watch and can be download in HD or DVD both formats which is completely illegal. The movie also stars Riteish Deshmukh, Kriti Sanon, Bobby Deol, Chunky Panday, Pooja Hegde, and Kriti Kharbanda in lead roles.

Housefull 4 which is the fourth iteration in the Housefull franchise has registered total box office collection of Rs 50 crore in its opening weekend with ₹18.50 crore in its opening day. The film clashed with Rajkummar Rao and Mouni Roy’s Made In China, and Taapsee Pannu and Bhumi Pednekar’s Saand Ki Aankh. The film has beat the competitors, piracy and came out as a box office collection winner.

What Housefull 4 Is All About?

Directed by Farhad Samji, the Housefull 4 is based on reincarnation, spanning a period of 600 years from 1419 to 2019. Three couples are parted away in 1419 Sitamgarh due to an evil conspiracy. The couple’s reincarnations meet again in 2019 London but each one of them is marrying the wrong person. And now what interesting part is- History repeats itself as they land up in the same place, Sitamgarh.

The film received negative reviews but somehow became the box office success with a worldwide gross collection of ₹238.02 crores as of 7 November 2019. Taran Adarsh, trade analyst and critic gave the film one and a half stars out of five and called it “disappointing”. According to some critics, the film was neither funny nor logical which suffers on the account of poor writing and vacuous screenplay.

Celebrities stormed social media with their funniest moves and fans have flooded the Internet with their hilarious dance steps. Bala Challenge is what set the movie on fire on the internet which challenged his friends and fans to perform the signature step.

100 million Shaitan ke saale are shaking a leg with us! #TheBalaChallenge abhi bhi jaari and thank y’all for that. Book your tickets for #Housefull4 NOW!
BMS: https://t.co/gJcF0gxm8V
Paytm: https://t.co/PJtvOW1L1x pic.twitter.com/yzk2BuzYnM

After Amitabh then Salman, we need to simply acknowledge the growing cult of @akshaykumar , as an audience I was not impressed with #housefull4 but which other actor could have pushed this movie to beyond 200 crores? Let us acknowledge that Akshay is a MEGA STAR.

#Housefull4 is honestly the best family entertainer in the recent times. Such a fun watch. No wonder it is doing well. Today too, the theatre had 80% occupancy. Sometimes, try to spend money on a pure entertainment. @foxstarhindi @NGEMovies @akshaykumar