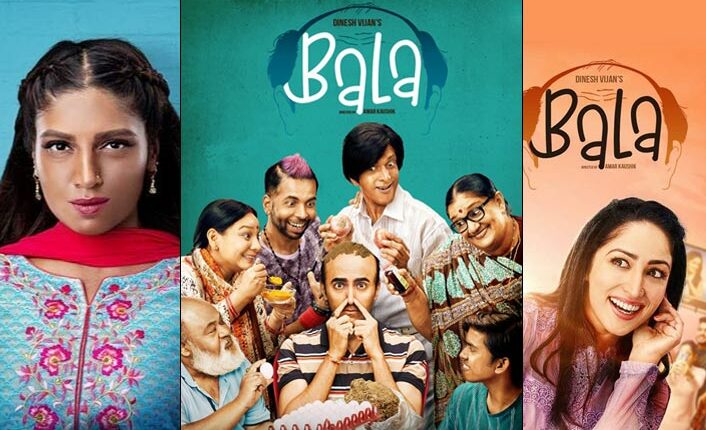 Ayushmann Khurrana’s latest offering Bala released on 8th November has now become the latest victim of piracy website. And it’s none another than Tamilrockers. The film has opened to a good occupancy but being leaked on its theatrical release might affect its box office collection. The worst part is the film is available for illegal free download online in HD print on Tamilrockers and other torrent websites.

This is not the first time the films have been leaked online within hours of the release. The big-budgeted films from Hollywood, Bollywood and South Indian movies have fallen prey to Tamilrockers, Movierulz, Bolly4u and other notorious piracy websites.  Tamil biggies like Thalapathy Vijay’s Bigil, Bollywood latest offering Housefull 4, Hollywood Terminator: Dark Fate were targeted by Tamilrockers.

The most interesting part is that many times Tamirockers website are banned but somehow they every time manage to say hello to the new domain.

Recently, in order to curb piracy of films, Producers Guild of India commanded punishment i.e. fine of Rs 10 lakh or three years of a jail term or both.

What Bala Movie Is All About?

Directed by Amar Kaushik, the film Bala starres Ayushmann Khurrana in the titular role, Bhumi Pednekar as a dusky small-town educated woman and Yami Gautam as supermodel based in Lucknow. The film is a story of a youngster who faces premature balding because of alopecia and how the lack of confidence and societal pressure plays the role. The film was shot in areas of Mumbai, Kanpur and Lucknow and released under the banners of Maddock Films and Jio Studios.

Soon after the trailer released on 10 October 2019, the film Bala faced controversies from the makers of Ujda Chaman in respect to copyright violations as the storyline was similar. Now both the films are facing a tough completion in the box office as both deals with premature balding.

Ayushmann Khurrana every time comes with an intriguing storyline which just wow the audience. It’s just not about premature balding, the film Bala also take a dig on the society that judges a person’s personality on the amount of hair on the person’s scalp. Truly, this film stands on a comedy venture with a strong powerful message.

Being a small town model and a TikTok sensation, Yami Gautam totally shines in her character that explains the reason why she is obsessed with good looks. And being the confident lawyer, Bhumi Pednekar character focuses the struggle she faced all her life due to her dark complexion.

The film ends with self-love and making the audience feel that it’s okay to feel perfect with your imperfections. With endless humour and wit, The film Bala is worth watching.

In existing times of vanity, complexes, social stigmas and social media, #Bala says a lot & entertains a lot more. Superbly written #NirenBhatt and directed #AmarKaushik with a superb ensenmble cast led brilliantly by @ayushmannk, this is a must watch ????????❤️

COME FALL IN LOVE WITH YOURSELF ! #Bala is a Masterpiece in every prospect which Depicts the human emotion / feelings in a perfect way & gives various important messages. Humorous Dialogues, Quirky BGM, Brilliant Direction & Superlative Acts are The USP?#balareview pic.twitter.com/qQfn7XMCmq

What a movie! In true sense, #Bala is a Bold movie and easily the Best Film in recent times..

It's a perfect blend of comedy and emotions.. must see for the entire family..