TinyHero — The next generation NFT gaming on Polygon


Singapore, Aug. 26, 2021 (GLOBE NEWSWIRE) — As Polygon’s COO once said, even in the U.S., gaming is bigger than Hollywood, NBA and multiple other industries combined. Play-to-earn and various other models that are coming in are going to disrupt the business models in the gaming industry. Many believe that NFT is the gateway to bring masses into the blockchain. Polygon has also set up a $100M fund to focus on gaming projects so that developers can fuse their Web 2.0 games with the Web 3.0 decentralized technology. And we definitely want to be part of this evolution. 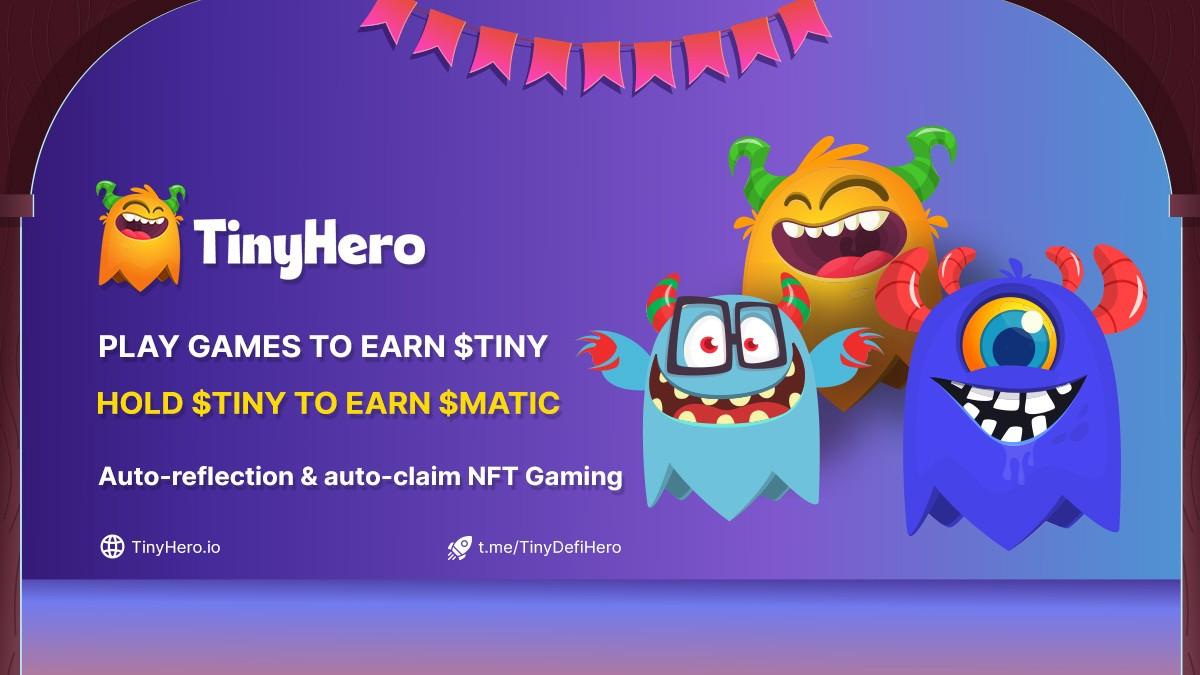 Inspired by Tikitoken and Safemoon, which were the ones to bring awareness to RFI and HODL rewards, TinyHero is the first ever PvE and PvE NFT game with auto-reflection and auto-claim protocol on Polygon. Below is our unique redistribution mechanism.

The token contract employs a static rewards system — up to 12% of every transaction will be split into:

This is a concept that was popularized by Safemoon. The mechanism incentivizes token holders to hold in order to earn dividends from the transactions (buys and sells).

Redistribution is based on percentage (in the contract), current token balance and number of holders. TL;DR: You receive more tokens automatically.

We created a unique system that auto-claims for every single holder the amount due. We call it the TINY PROTOCOL.

The way it works for holders: You buy TINY tokens and hold them, every 60 minutes you’ll automatically receive $MATIC in your wallet. Not a single action is required.

Your TINY tokens amount is persistent and won’t change.

This system is fully automated and doesn’t add minimal gas fees proportional to value transferred. The number of holders processed through each transaction is dynamic and based on transaction size. Holders will receive dividends from the queue based on their position in the array. It’s a fair system, fully automated.

What’s also special about TinyHero is that: NFT purchases, game play, upgrade and breeding won’t cost you any transaction fee. All $TINY used to buy NFTs will be burned.

At Stage 1, a blockchain PvE game will be launched, An essay-to-play game for everyone, with purchased NFT, anyone can start fighting with the 7 monsters in-game with a success rate up to 80%, to earn EXP as well as TINY each round of fighting. The fighting is real-time and blockchain-based to give the most fair and straight rewards after each fight.

Players can pair any of their NFTs for random breeding of new NFT. With your luck, you may breed a brand new, pure, powerful and more valuable NFT.

With the fighting EXP and TINY, players can upgrade their NFT whenever ready to have as much stronger NFT.

At Stage 2, a PvP gameplay will be introduced and allow players to fight each other. Players can assemble a team of 3 of their collections to battle against components and gain EXP as well as TINY

More details on game rules will be described in documentation as well as a separate article.

TINY NFT will not only be used to play in-game but also can be staked to earn MATIC from the ecosystem.

Only Level 2 and above NFT can be staked. The more power your NFT staked the more rewards you share.

TINY NFT Market will be launched to let users purchase and exchange NFT.

After IDO completion on 23 Aug, $TINY tokens are available for purchase on PolyDEX.fi Exchange.

Let’s play and earn TINY! Join the Tiny world and build a powerful team to battle against other players.

Do you know the dark side of humans in reference to animal brutality?