The Electronic Dance Music have a latin-queen: Andrea Hoyos 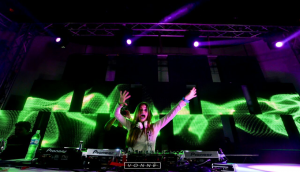 Currently in US, she has reached an all-time popularity, despite the competition

MIAMI, FLORIDA, ESTADOS UNIDOS, April 27, 2022 /EINPresswire.com/ — Andrea Hoyos was born in Venezuela on March 29, 1994. The renowned artist has been internationally recognized as the most influential female DJ, more specifically throughout South and North America. She has been nominated and awarded with the most prestigious award in Venezuela, the “Tacarigua de Oro Awards”.

The DJ is currently located in the United States, where the career as a DJ has reached an all-time popularity. Despite the vast competition in the field, she has been able to achieve recognition as one of the best DJ’s in North America, and the best throughout South America.

Andrea’s latest work was released on April 5th, 2022 in collaboration with Alicia Banquez, the most famous singer in Venezuela. The artists released a remix of the song “Viva”, which is expected to achieve peak-high numbers due to the explosive combination of the best Venezuelan DJ and the best Venezuelan singer.

The DJ continues to surpass all expectations set by her fans and her audience, demonstrating that she continues to be the best at what she does.


EIN Presswire’s priority is source transparency. We do not allow opaque clients, and our editors try to be careful about weeding out false and misleading content.
As a user, if you see something we have missed, please do bring it to our attention. Your help is welcome. EIN Presswire, Everyone’s Internet News Presswire™,
tries to define some of the boundaries that are reasonable in today’s world. Please see our
Editorial Guidelines
for more information.