MOJAVE, Calif., Jan. 17, 2022 /PRNewswire/ — Stratolaunch LLC is excited to announce the successful completion of its third Roc carrier aircraft test flight on Jan. 16, 2022. Roc is the world’s largest aircraft, with a 385 ft. wingspan. 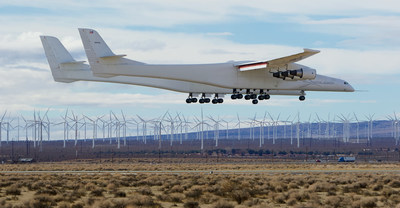 The aircraft took off at 8:47 a.m. PST and flew for 4 hours, 23 minutes over the Mojave Desert. It reached an altitude of 23,500 feet (7162.8 m) at an indicated air speed of 180 knots. This flight further prepared the carrier aircraft to support launches of its upcoming hypersonic testbed vehicle, Talon-A.

Initial results of the test objectives achieved include:

“Today’s successful flight demonstrates and validates improvements to the carrier aircraft’s systems and overall flight performance,” said Dr. Zachary Krevor, Stratolaunch President and Chief Operating Officer. “We will take the data we gathered and continue to advance the aircraft’s operational performance to support hypersonic testing in 2022.”

“The partial gear retraction seen during the flight is a graduated approach to building confidence in the landing gear and gear door hardware. Testing the left main landing gear individually mitigated risk and provided our aircrew with options for landing the aircraft in the event the hardware didn’t perform as expected,” Krevor said. “We’ll review the data and determine when we can get back into the air to continue advancing our unique, hypersonic architecture.”

In addition to testing the carrier aircraft, the team continues to make incredible strides in building its first two Talon-A test vehicles, TA-0 and TA-1. TA-1 completed its initial power-on testing in late December 2021, keeping the company on track to begin hypersonic flight testing in 2022 and to deliver services to government and commercial customers in 2023.

About Stratolaunch
Stratolaunch’s mission is to advance high-speed technology through innovative design, manufacturing, and operation of world-class aerospace vehicles. For the latest news and information, visit www.stratolaunch.com and follow us on Facebook, Twitter, LinkedIn, and Instagram.

Colorado Cash Buyers is Changing the Cash for Home Perception