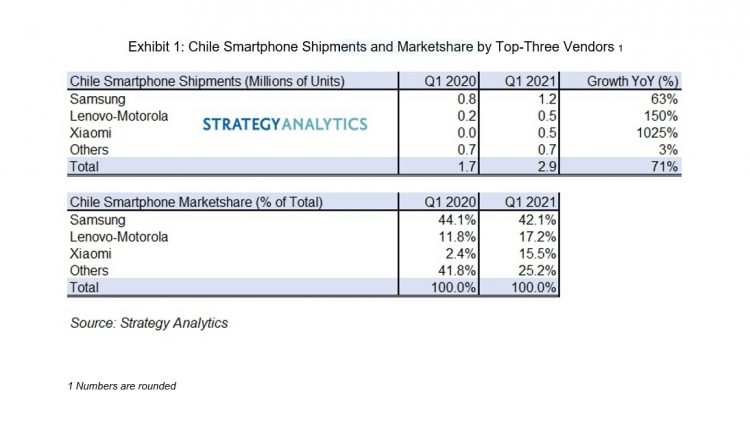 BOSTON–(BUSINESS WIRE)–According to new research from Strategy Analytics, Chile smartphone shipments jumped 71% YoY to an all-time high of 2.9 million units in the first quarter of 2021. Xiaomi was the star performer, surging over 1000% annually to capture third place and a record 16% marketshare. Xiaomi is on track to grab second place by the end of the year.

Neil Mawston, Executive Director at Strategy Analytics, said, “Smartphone shipments in Chile jumped 71% YoY from 1.7 million units during Q1 2020 to a record 2.9 million in Q1 2021. Despite Covid and political uncertainty, demand for smartphones soared due to a buoyant economy, strong exports, and a perceived high vaccination rate. Chile is the third largest smartphone market in Latin America, after Brazil and Mexico.”

Woody Oh, Director at Strategy Analytics, added, “We estimate Samsung grew its Chile smartphone shipments a healthy 63% YoY from 0.8 million in Q1 2020 to a record 1.2 million during Q1 2021. Samsung’s smartphone marketshare in Chile remains relatively stable for now, around the 42% level. Samsung has extensive retail presence in Chile and its midrange A series models are wildly popular. Lenovo-Motorola held second place and grew its smartphone marketshare in Chile from 12% during Q1 2020 to a record 17% in Q1 2021. The Motorola brand remains popular with Chilean consumers who like 4G smartphones at affordable price-points.”

Rajeev Nair, Senior Analyst at Strategy Analytics, added, “We estimate Xiaomi smartphone shipments in Chile grew over 1000% from near-zero in Q1 2020 to a record 0.5 million units during Q1 2021. Xiaomi has soared from 2% to 16% smartphone marketshare in Chile during the past year. Xiaomi is Chile’s fastest-growing smartphone brand. Xiaomi’s budget Redmi models are winning strong consumer acceptance, they have helped Xiaomi capture third place in Chile and to maximize its gains from the pullout of Huawei. If current growth trends continue, Xiaomi will overtake Lenovo-Motorola to become Chile’s second largest smartphone brand before the end of 2021.”

Woody Oh, Director at Strategy Analytics, added, “There remains much to play for in Chile. OPPO, Vivo, Realme and other Chinese brands have ambitious smartphone expansion plans for the year ahead. Samsung’s dominance and Xiaomi’s soaring growth in Chile are by no means guaranteed.”

Strategy Analytics is a global, independent research and consulting firm. The company is headquartered in Boston, US, with offices in the UK, France, Germany, Japan, South Korea, Taiwan, India, and China. Visit www.strategyanalytics.com for more information.

Over 50 Marketing Experts from 15 Countries to Speak at Digital Asia Summit, Starting…

Gopher Response to Statement by Playtech, Related Clarifications and Reasons Why…