STEPM – Try to reach Mars by your steps


Singapore, May 16, 2022 (GLOBE NEWSWIRE) — Honestly, if anyone has to choose the most exciting Web 3.0 project with Game-Fi and Social-Fi elements that will launch shortly, they will select STEPM. With the fascinating ideas and visions, STEPM stands out among the other Move to Earn projects. To stand at the top with other successful predecessors.

Observing STEPM’s Whitepaper, it can be observed that how passionate they are. An absolute Elon Musk fan.

STEPM stands for Step to Mars. The M in STEPM, meaning Mars, is inspired by the idea of sending people to Mars by Elon Musk – the CEO of SpaceX. The team states that STEPM was born with the mission to improve human conditions: physical and mental health. By focusing on the daily activity most people need, which is moving, building a qualified force to join the journey to Mars in 2029.

The Game-Fi aspect of STEPM operates by the simple and popular mechanism: Move to Earn. The team develops the STEPM app, along with NFT Spaceshoes. Players can launch the app and equip themselves with NFT Spaceshoes that derive into many types, suitable for many players. By walking, jogging, and running outdoor, they can earn in-game tokens, which can be used or drawn into cash as profit. Through Game-Fi, STEPM aims to promote millions of people towards a healthier lifestyle against climate change, gene improvement, and an ecosystem suitable to the space environment on Mars.

At first people reaching STEPM, might think that this would be another Move to Earn concept relating project like the others. But diving further into the project, its ideas and game mechanism would fascinated them. The developer team is a solid team with an appealing visionary.

STEPM development team, with their brilliant designers’ imagination and creativity. They came up with fantastic pieces of art that would thrive in the heart of sneaker lovers. Also, based on players’ references, four types of NFT Spaceshoes are suitable for each. Including Walking, Jogging, Running, and Training. Each type requires players to move at different optimal speed and is also differentiated in reward earning.

For fairness between players and the integrity of the reward system, the reward will be distributed according to these factors:

One more good point to add is that they also divided the NFT Spaceshoes into different types of quality. The higher players’ NFT rate, the more significant reward they get; also, their NFT will be more valuable in the NFT marketplace. Four boxes of NFT Spaceshoes types will be available for sale, but the NFT quality will be random. Make the game even more exciting! 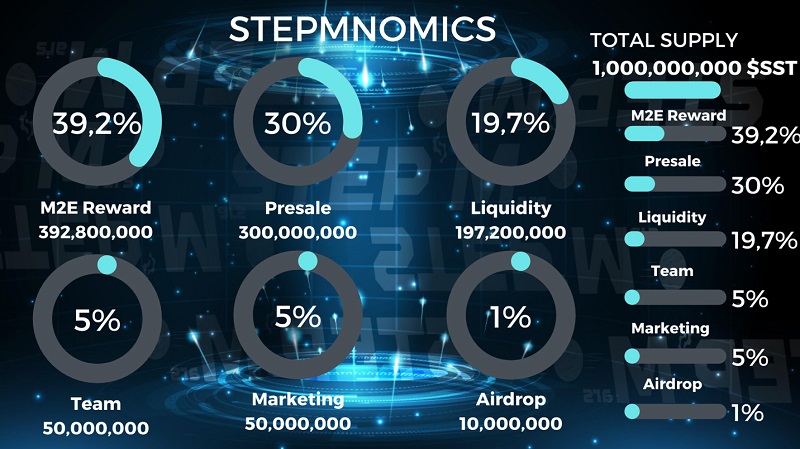 STEPM developer team is very confident about their Tokenomics’ design. Instead of using Tokenomics, they use STEPMnomics rather since they believe in the uniqueness of their design. They stated that designing an excellent Tokenomics will lay a substantial foundation for developing any Game-Fi project.

Looking at other giants in the Game-Fi market, especially Axie Infinity. Those giants are all encountering the most significant problem, which is inflation. So, STEPM knows it and learns from it. STEPM adopts a dual token system: the game token SMT and the governance token SST. SST has a limited supply capped at 1,000,000,000, and 30% of the total supply will be rewarded to users through move-to-earn and governance participation. Its token system borrows from successful mechanisms of Bitcoin, including “halving” and “difficulty bomb,” to keep the supply sustainable and the return proportional to the difficulty.

Compared to SST, SMT is a much more widely used, traded, and liquidated token at STEPM. By design, SST cannot be minted by users without reaching level 30. However, players can earn SMT from the first minute of their run. While players are making SMT, they are also spending SMT all the time – to level up your shoes, repair your shoes, open a mystery box, and so on. The high-frequent usage of SMT keeps the built-in financial system active and maintains the value of coins effectively.

STEPM developer team has created a convincing anti-cheating system. Whether players keep their phone on their dog or try cycling instead of running, the STEPM system can capture their cheating behavior and take back their earned SMT or even freeze their account. Additionally, to avoid people opening two accounts but only purchasing one NFT Spaceshoes to switch between them, STEPM has designed a cool-down period. During the cool-down period, users cannot use these NFT Spaceshoes.

Secondly, it is a beginner-friendly hands-on experience for people to transition from Web 2.0 to Web3.0. Video games first introduced the to-earn model. Gaming is not for everyone, but walking or running is much broader, bringing STEPM a huge audience pool. Also, STEPM focuses on mobile devices, which most people use to get online every day. Additionally, STEPM attempts to soften people’s barriers to using Web3.0-specific features. Its built-in wallet enables people to deposit crypto from centralized exchanges directly without Googling “how I can open a crypto account.”

The STEPM community plays a huge role in promoting the app. Both Telegram and Discord groups are very active and friendly. Beginners can find guides everywhere online. Many people even help their parents purchase NFT Spaceshoes and join the game. Their parents do not need to know what blockchain is but just to click start on the app, exercise as usual, and earn.

STEPM encourages players to try it when the app is released, and the whole user experience design shown in the trailer is pretty smooth for them. As long as the “STEPMnomics” keep stable, players are very optimistic about STEPM’s future. Web 3.0 fitness projects have become a trend those days. Move to Earn will lead a new wave to push Web 3.0 to a broader audience, and STEPM will be one of the first contenders.

Join with STEPM now on the journey to the Mars!