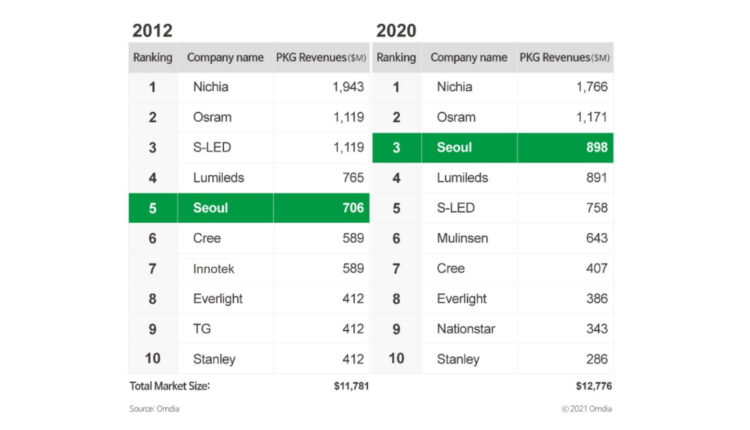 Double digit growth continued across all divisions including Display, General Lighting and Automotive, while the Automotive division led the growth by doubling its revenue year on year. “We started quarter against concerns regarding semiconductor shortage within the car industry manufacturing value chain. However, we managed to overcome headwinds thanks to structural growth from WICOP, our patented LED chip technology with a robust structure. WICOP is now applied to more than 102 car models globally this year as our automotive division entered secular growth stage,” said an officer of Seoul.

WICOP is designed to be a compact form factor suitable for slim and thin lenses as it does not require wire bonding or packaging. Also, thanks to its long product lifetime and high efficiency of heat conductivity, WICOP is actively applied to TV backlighting LEDs. WICOP chips are applied to about 20% of all global TVs.

Seoul expects its revenue for the third quarter to be between KRW 340 billion and KRW 360 billion growing 3% to 9% year on year, suggesting another quarter of all-time high revenue. “In the second half, mass production for the mini LED, one of the next generation display technologies is expected to begin. On top of that, we already raised our capital expenditures in the first half to cope with an upbeat demand forecast for general lighting and automotive LED,” said the officer of Seoul.

Seoul Semiconductor is the world’s second-largest global LED manufacturer, a ranking excluding the captive market, and has more than 14,000 patents. Based on a differentiated product portfolio, Seoul offers a wide range of technologies, and mass produces innovative LED products for indoor and outdoor lighting, automotive, IT products, such as mobile phones, computer displays, and other applications. The company’s world’s first technologies are becoming LED industry standard and leading global market with a package-free LED, WICOP; a high-voltage AC-driven LED, Acrich; a LED with 10X the output of a conventional LED, nPola; a ultraviolet clean technology LED, Violeds; an all direction light emitting technology, filament LED; a natural spectrum LED, SunLike; and more. For more information, please visit www.seoulsemicon.com/en.