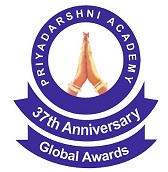 
The 37th Anniversary edition of the very prestigious Priyadarshni Academy Global Awards 2021 held virtually yesterday, proved to be a momentous event, organised under the adept leadership of Founder & Chairman Emeritus, Mr. Nanik Rupani and Chairman, Dr. Niranjan Hiranandani along with the Chairman of the Global Awards Advisory Committee, Dr. R A Mashelkar.


The Priyadarshni Academy was founded in 1984 by Nanik Rupani, with the motto “Service to Humanity is the best work of life”. Over the years, the academy has emerged as a foremost non-profit, socio-cultural and educational organisation, with remarkable achievements that have surpassed its goals and won many hearts. Priyadarshni Academy’s Global Awards are a tribute to the recipients from all walks of life, from all corners of the globe who have excelled in their respective disciplines. The academy believes that recognising the achievements of individuals is of paramount importance to inspire leaders of current and future generations.


Nitin Gadkari said, “I have been associated with Priyadarshni Academy for over 25 years and have even received an award from them. I appreciate that Nanik Rupani recognises the great contribution of people, not just from India but from the whole world. He is in a true sense, a cultural ambassador for India because of the way he has built relationships and presented our traditions and culture to the world.”


“Receiving the award is acknowledging the reality that if one contributes to the betterment of people, society also recognises it, and this encourages people to do more. Over 37 years, Priyadarshni Academy has brought forth the stories of many distinguished people and through this touched the lives of many others,” said Mr. Suresh Prabhu.


“This function is very encouraging for it has very deserving award winners this evening. It helps inspire others to learn from the rich experience of those who receive awards and contribute to society,” said Mr. Piyush Goel, as he shared his appreciation for each awardee and office bearers saying that he was sure the destiny of every award winner was linked to the wider destiny of the world. He reminded the audience that everyone has a role to play for a better future, that collectively working towards a sustainable future, and common goals of human progress was key.


Recipient of the 37th Anniversary Priyadarshni Academy Ramkrishna Bajaj Memorial Global Award for Outstanding Contribution to Industry, Commerce and Infrastructure Development was Mr. Gautam Adani, Founder and Chairman, Adani Group, Ahmedabad, India. Mr. Adani drew our attention towards building a greater India. His clarion call was for an India that is visibly a more atma nirbhar India, a more muscular India, and an India that is more for Indians. Pointing to the far-reaching implications of the pandemic on the world order, he said that if there was ever a time when democratic India had an opportunity to stand strong and celebrate our Indianness, it was now.


Harbinger of Peace, Priyadarshni Academy’s Global Award for Outstanding Contribution to Human Welfare and Spirituality was given to Gurudev Sri Sri Ravi Shankar, Founder, The Art of Living, Bengaluru, India. Gurudev began with a salutation to the divinity in every heart that makes the world a place of unity in diversity. He compared the work of Priyadarshni Academy to the thread that strings pearls together, so it becomes more adorable for humanity. “We attain the highest best for society when people work together, we are all part of the greater vision of better humanity and better society to come,” he said. “We all together have one vision to make the world a better place – a stress free, violence free world is what we all aspire. Prosperity and peace go together. Wherever there is peace prosperity happens, and wherever there is prosperity, peace automatically happens. With our collective intention I am sure we will be able to give a better world to current and future generations.”


The recipient of Priyadarshni Academy’s Pralhad P. Chhabria Memorial Global Award for Outstanding Contribution to Journalism and Freedom of Press was Mr. Sang-Hoon Bang, President & CEO, The Chosunilbo, South Korea. Mr. Sang-Hoon said, “The pandemic is a big threat to all of us but is also a significant opportunity for all of us to come together to overcome the difficult times.”


Priyadarshni Academy’s Global Award for Outstanding Contribution to National Economic Recovery was awarded to Mr. Airlangga Hartarto, Coordinating Minister for Economic Affairs, Republic of Indonesia. He spoke of Indonesia’s efforts for economic recovery post pandemic saying that accelerating the economy and dealing with health problems remains high in his agenda and that international collaboration is key. He expressed his appreciation for the collaboration with India through the platform of this distinguished award and highlighted the opportunities for learning from each other to win the battle against the pandemic.


The Priyadarshni Academy Harish Mahindra Memorial Global Award for Outstanding Contribution to Sustainable Economic Growth and Tackling Climate Change was awarded to Lord Nicholas Stern, Chair, Grantham Research Institute on Climate Change and the Environment, The London School of Economics, United Kingdom. Speaking on the occasion Lord Stern said, “This is an immense honour and I feel deeply privileged.” He shared that the world is already witnessing the severe and violent effects of climate change, and with increasing temperatures, and all countries including India are very vulnerable to its impact. “The whole world must move very rapidly away from the burning of fossil fuel and the destruction of the natural capital of biodiversity, the central causes of these changes. Fundamental change must occur in all countries to avoid this catastrophe.” He said that India can avoid the mistakes of richer countries as it builds its infrastructure, using renewable energy, LED light bulbs and using creative approaches to build cities where you can move and breathe. “It will be impossible to manage climate without India, and India itself has so much to gain.”


The Priyadarshni Academy Global Award for Outstanding Contribution to Promoting Women’s Welfare, Rights and Gender Equality was awarded to Baroness Sandip Verma, Chair, UN Women UK; Member of the House of Lords, United Kingdom. She pointed out that life for many women and girls has become even more challenging in the pandemic, and hoped that as we come out of this, businesses, organisations, and governments will try to find a more balanced way to return to a much better, more inclusive, new norm.


The Priyadarshni Academy Smita Patil Memorial Award for Best Actor was awarded to Ms. Kiara Advani and Chairman Mr. Hiranandani encouraged all people to see her films in case they have missed it.


Ms. Reena Rupani, Vice Chair of the Priyadarshni Academy conducted the programme with utmost elan and grace, while the Vice Chair, Mr. Ashish Vaid accorded a vote of thanks.


Speaking on the occasion Mr. Rupani said, “Priyadarshni Academy’s prestigious award function is always a glittering affair because of the immense popularity of those who are being honoured for their outstanding contribution to the society at large. Their towering personalities, rousing triumphs, and hardcore devotion to service are truly commendable. This is the reason that the Priyadarshni Awards are often referred to as the Nobel Awards of Asia.”


The Priyadarshni Academy was founded in 1984 by Nanik Rupani, with the motto “Service to Humanity is the best work of life”. Over the years, the academy has emerged as a foremost non-profit, socio-cultural and educational organisation, with remarkable achievements that has surpassed its goals and won many hearts. Priyadarshni Academy provides scholarships to deserving and financially needy school and college students to excel in their chosen fields, promotes classical arts, presents literary awards to recognise writers and publishes books to promote ancient Indian wisdom. The academy has conducted a host of activities over the years which have been of tremendous benefit to humanity. Priyadarshni Academy’s Global Awards are a tribute to the recipients from all walks of life, from all corners of the globe who have excelled in their respective disciplines. The academy believes that recognising the achievements of individuals is of paramount importance to inspire leaders of current and future generations.


For most people the name Nanik Rupani is synonymous with Priyadarshini academy. As founder and chairman emeritus he has nurtured the academy with tremendous zeal throughout its 37-year history. He has dedicated the better part of his life to humanitarian causes and is the backbone, heart, and soul of the academy. A highly multifaceted individual and a master problem solver, he is a Trustee of Lilavati Hospital, a Principal Advisor to MIT Group of Institutions, Past President of several Chambers of Commerce and serves on the boards of several business and social organisations. He believes that success is everyone’s birth right and the best way to succeed is by helping others.


The highly charismatic and debonair business magnate Niranjan Hiranandani serves as the Chairman of the Academy and institution by himself, he is a powerhouse of unlimited enthusiasm. Most people know him as a real estate tycoon, but few know that he wears many hats – industrial parks, infrastructure, data centres, hospitality, education, and healthcare are some of his many endeavours. With his profound knowledge, sharp business acumen and go-getter attitude, he has held leadership positions across prominent business organisations, government bodies and apex chambers. The latest feather in his cap is the newly established HSNC University, where he serves as the institute’s Provost. This is the first university in Mumbai to be managed by a private trust.

Over 3,000 Works Available for Translation! Translate Easily Online, Split the…

Australian Ethical (ASX:AEF) doubles down on climate & tech solutions with…