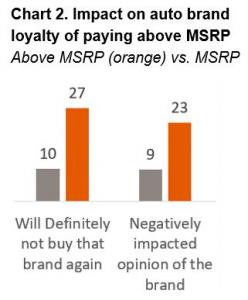 In GfK AutoMobility™ analysis, “above-list” purchasers are almost three times as likely to say they will not buy the same brand again

NEW YORK, NY, UNITED STATES, August 8, 2022 /EINPresswire.com/ — As the competition for new cars of almost every make and model reaches a fever pitch, a growing number of auto shoppers are paying list price – and sometimes more – just to secure a vehicle. This may seem like a windfall for dealers and manufacturers – but new research from GfK AutoMobility™ reveals that the phenomenon may be having serious longterm impacts on customer affinity and loyalty.

GfK’s research shows that 80% of car buyers in May and June 2022 paid at or above the manufacturer’s suggested retail price (MSRP) for their new cars –a startling contrast to the industry’s long-standing tradition of significant discounts. Among those who spent above the suggested price:

• 34% paid fees they had never heard of before

• 31% purchased a model that wasn’t their first choice

• 30% compromised on the features they wanted

• 30% bought from a dealer who wasn’t their first choice

Not surprisingly, all of these concessions and disappointments are making an impression on auto purchasers – but the depth of their resentment may surprise sellers and manufacturers alike. Three in ten (31%) buyers who paid above MSRP said they would tell others not to go to the dealership they used – roughly double the level (14%) for those who simply paid MSRP. (See Chart 1.)

GfK found equally strong negative feelings toward car brands themselves. One-quarter (27%) of those who purchased above MSRP said they would never buy the same brand again, compared to just 10% of those who simply paid the suggested price. (See Chart 2.)

The trend toward near-hostility aimed at dealers, in particular, is gaining momentum at lightning speed. The proportion of above-MSRP buyers who said they will not go to the same dealer for service rose 9 percentage points – from 23% to 32% — in just one month (from May to June). And the level for those who said they would tell others not to go to that dealer jumped seven points – from 28% to 35% — in the same timeframe.

“The extreme effects of supply chain breakdowns and inflation may seem like a perfect storm – one that demands unprecedented pricing practices,” said Julie Kenar, SVP at GfK AutoMobility. “But manufacturers and dealers need to think beyond today’s troubles to protect their brands for the long term. While paying above MSRP may not seem terribly different than simply paying the list price, our research shows that the negative feelings generated are much stronger – and more threatening to future business.”

GfK AutoMobility is the leading Auto Intenders Brand and Attitude Insights research in the US. Since 1982, GfK’s Automotive Purchase Funnel has been the bedrock for analysis and insights throughout the automotive industry. The funnel consistently tracks performance throughout each stage of the purchase process, determines competitive strengths and weaknesses, assesses consumer responses to marketing actions, and provides you with overall guidance and diagnostics for managing marketing actions.


EIN Presswire’s priority is source transparency. We do not allow opaque clients, and our editors try to be careful about weeding out false and misleading content.
As a user, if you see something we have missed, please do bring it to our attention. Your help is welcome. EIN Presswire, Everyone’s Internet News Presswire™,
tries to define some of the boundaries that are reasonable in today’s world. Please see our
Editorial Guidelines
for more information.