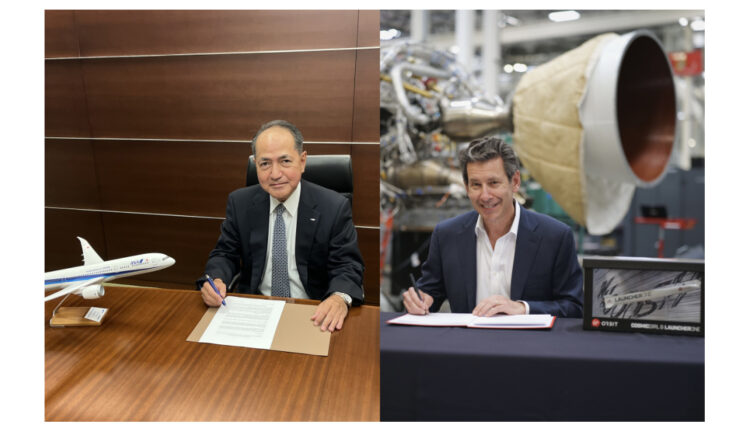 LONG BEACH, Calif–(BUSINESS WIRE)–Virgin Orbit, the responsive launch and space solutions company that has announced a planned business combination with NextGen Acquisition Corp. II (“NextGen”) (NASDAQ: NGCA), today announced that it has entered into a memorandum of understanding (“MOU”) with ANA HOLDINGS INC., the owners of Japan’s largest airline, to procure twenty flights of the LauncherOne rocket and to lead the effort to provide funds and support for those orbital missions to launch from Japan’s Oita Prefecture. The terms of the MOU call for ANA HOLDINGS and several of its partners to fund the manufacturing of a new set of the mobile ground support equipment used to prepare Virgin Orbit’s LauncherOne system for flight from a pre-existing runway, with a target of making Oita a LauncherOne-ready spaceport by as soon as the end of 2022, pending appropriate regulatory approvals in the United States and Japan.

Japan’s impressive aerospace industry has long been at the forefront of satellite technology innovation. However, the available launch services in Japan – and throughout all of Asia – have always been launched from fixed sites on the ground. Supported by ANA’s premier logistics and transport services, Virgin Orbit is set to change that by bringing air-launch to the Eastern Hemisphere for the first time in history.

By using a customized 747 as its flying launch pad, mobile mission control, and fully re-usable first stage, LauncherOne gains a substantial performance boost over a similarly sized ground-launched system. Additionally, the airplane’s ability to cover large distances between taking off and releasing the rocket provides both weather resiliency and direct-inject orbital flexibility that until now, has never been available on the Asian market.

Virgin Orbit’s flight-proven air-launch service provides a unique capability for ANA’s customer base in the booming commercial ecosystem for space in Asia. The number of space start-ups in Japan has more than doubled since 2015, driven by increasing level of investment and government activities to energize and accelerate the private sector. The increasing amount of funding and investment in the space industry has encouraged start-ups to venture into space businesses, and legacy companies to expand their offerings – and launch is a critical enabler for those businesses and their future growth.

Koji Shibata, ANA Group Representative Director and Executive Vice President, noted, “ANA is excited to work with Virgin Orbit to offer responsive launch and space solutions services to customers in Japan. Demand for satellite launches in Japan and Asia is rapidly increasing, and it is hoped that the number of launches will be desired from the customers. Virgin Orbit offers something no other launch company can, and that capability will be extremely valuable to the growing space industry in Japan and throughout the region.”

“ANA is a world-class company with an incredible legacy of aerospace innovation, commercial success, and customer satisfaction that makes them an absolutely ideal partner to bring air-launch to Asia,” said Virgin Orbit CEO Dan Hart. “We are elated to be partnering with such a talented and honored firm to move space launch forward and serve the rapidly growing need for launch. We look forward to collaborating with ANA to foster the ongoing transformation of the space economy.”

Virgin Orbit operates one of the most flexible and responsive space launch systems ever built. Founded by Sir Richard Branson in 2017, the company began commercial service in 2021, and has already delivered commercial, civil, national security, and international satellites into orbit. Virgin Orbit’s LauncherOne rockets are designed and manufactured in Long Beach, California, and are air-launched from a modified 747- 400 carrier aircraft that allows Virgin Orbit to operate from locations all over the world in order to best serve each customer’s needs. On August 22, 2021, Virgin Orbit entered into a definitive agreement to combine with NextGen Acquisition Corp. II (“NextGen”, NASDAQ: NGCA), a special purpose acquisition company, which would result in Virgin Orbit becoming a publicly listed company on the Nasdaq Stock Market under the symbol VORB. To learn more, visit virginorbit.com

NextGen Acquisition Corp. II is a blank check company whose business purpose is to effect a merger, share exchange, asset acquisition, share purchase, reorganization or similar business combination with one or more businesses. NextGen is led by George Mattson, a former Partner at Goldman, Sachs & Co., and Gregory Summe, former Chairman and CEO of Perkin Elmer and Vice Chairman of the Carlyle Group. NextGen is listed on Nasdaq under the ticker symbol “NGCA.” For more information, please visit www.nextgenacq.com.

Founded in 1952 with just two helicopters, All Nippon Airways (ANA) has grown to become the largest airline in Japan. ANA HOLDINGS INC. (ANA HD) was established in 20 13 as the largest airline group holding company in Japan, comprising 71 companies including ANA and Peach Aviation, the leading LCC in Japan.

ANA is a launch customer and the largest operator of the Boeing 787 Dreamliner, making ANA HD the biggest Dreamliner owner in the world. A member of Star Alliance since 1999, ANA has joint venture agreements with United Airlines, Lufthansa German Airlines, Swiss International Airlines, Austrian Airlines and Brussels Airlines – giving it a truly global presence.

The airline’s legacy of superior service has helped it earn SKYTRAX’s respected 5-Star rating every year since 2013, with ANA being the only Japanese airline to win this prestigious designation for nine consecutive years. ANA also has been recognized by Air Transport World as “Airline of the Year” three times (2007, 2013 and 2018); it is one of only a select few airlines to win this prominent award multiple times.

For more information, please refer to the following link:

Additional Information and Where to Find It

Investors and security holders may obtain free copies of the registration statement, the proxy statement/prospectus included therein and all other relevant documents filed or that will be filed with the SEC by NextGen through the website maintained by the SEC at www.sec.gov.

The documents filed by NextGen with the SEC also may be obtained free of charge at NextGen’s website at https://www.nextgenacq.com/nextgen-ii.html or upon written request to 2255 Glades Road, Suite 324A, Boca Raton, Florida 33431.

Participants in the Solicitation

NextGen and Vieco USA and their respective directors and executive officers may be deemed to be participants in the solicitation of proxies from NextGen’s shareholders in connection with the proposed transaction. Additional information regarding the interests of those persons and other persons who may be deemed participants in the proposed transaction may be obtained by reading the proxy statement/prospectus. You may obtain a free copy of this document as described in the preceding paragraph.

This document contains certain forward-looking statements within the meaning of the federal securities laws with respect to the proposed transaction between Vieco USA and NextGen. These forward-looking statements generally are identified by the words “believe,” “project,” “expect,” “anticipate,” “estimate,” “intend,” “strategy,” “future,” “opportunity,” “plan,” “may,” “should,” “will,” “would,” “will be,” “will continue,” “will likely result,” and similar expressions. Forward-looking statements are predictions, projections and other statements about future events that are based on current expectations and assumptions and, as a result, are subject to risks and uncertainties. Many factors could cause actual future events to differ materially from the forward-looking statements in this document, including but not limited to: (i) the risk that the transaction may not be completed in a timely manner or at all, which may adversely affect the price of NextGen’s securities, (ii) the risk that the transaction may not be completed by NextGen’s business combination deadline and the potential failure to obtain an extension of the business combination deadline if sought by NextGen, (iii) the failure to satisfy the conditions to the consummation of the transaction, including the adoption of the Merger Agreement by the shareholders of NextGen, the availability of the minimum amount of cash available in the trust account in which substantially all of the proceeds of NextGen’s initial public offering and private placements of its warrants have been deposited following redemptions by NextGen’s public shareholders and the receipt of certain governmental and regulatory approvals, (iv) the lack of a third party valuation in determining whether or not to pursue the proposed transaction, (v) the inability to complete the PIPE investment in connection with the transaction, (vi) the occurrence of any event, change or other circumstance that could give rise to the termination of the Merger Agreement, (vii) the effect of the announcement or pendency of the transaction on Vieco USA’s business relationships, operating results, and business generally, (viii) risks that the proposed transaction disrupts current plans and operations of Vieco USA and potential difficulties in Vieco USA employee retention as a result of the transaction, (ix) the outcome of any legal proceedings that may be instituted against Vieco USA or against NextGen related to the Merger Agreement or the proposed transaction, (x) the ability to maintain the listing of NextGen’s securities on a national securities exchange, (xi) the price of NextGen’s securities may be volatile due to a variety of factors, including changes in the competitive and regulated industries in which NextGen plans to operate or Vieco USA operates, variations in operating performance across competitors, changes in laws and regulations affecting NextGen’s or Vieco USA’s business, Vieco USA’s inability to implement its business plan or meet or exceed its financial projections and changes in the combined capital structure, (xii) the ability to implement business plans, forecasts, and other expectations after the completion of the proposed transaction, and identify and realize additional opportunities, (xiii) the ability of Vieco USA to implement its strategic initiatives and continue to innovate its existing products, (xiv) the ability of Vieco USA to defend its intellectual property, (xv) the ability of Vieco USA to satisfy regulatory requirements, (xvi) the impact of the COVID-19 pandemic on Vieco USA’s and the combined company’s business and (xvii) the risk of downturns in the commercial launch services, satellite and spacecraft industry. The foregoing list of factors is not exhaustive. You should carefully consider the foregoing factors and the other risks and uncertainties described in the “Risk Factors” section of NextGen’s registration statement on Form S-1 (File No. 333-253848), the registration statement on Form S-4 discussed above, the proxy statement/prospectus included therein and other documents filed or that may be filed by NextGen from time to time with the SEC. These filings identify and address other important risks and uncertainties that could cause actual events and results to differ materially from those contained in the forward-looking statements. Forward-looking statements speak only as of the date they are made. Readers are cautioned not to put undue reliance on forward-looking statements, and Vieco USA and NextGen assume no obligation and do not intend to update or revise these forward-looking statements, whether as a result of new information, future events, or otherwise. Neither Vieco USA nor NextGen gives any assurance that either Vieco USA or NextGen, or the combined company, will achieve its expectations.