MetaBomb Plants Explosives on GameFi in 2022


Following suit with the fruitful ‘lazy-game’ model, Metabomb is designed for all different types of players.

Hanoi, Vietnam, April 11, 2022 (GLOBE NEWSWIRE) — Vimeta Ltd. First introduced to the public in March 2022, MetaBomb is launching its IDO this month, and dropping a few bombs on the GameFi market in Q2 of 2022.

Since the launch of the very first blockchain game CryptoKitties in 2017 and followed by the introduction of numerous popular projects, including Axie Infinity in 2018, despite the excellent starts of these games, the fledgling market underwent a gloomy period from 1 January 2018 to 1 January 2022 due to the crypto winter. However, it finally went places as the GameFi market has witnessed a fast-paced growth since November 2020.

Stepping into the GameFi market in its infancy, MetaBomb Founder Cuong Vu has experienced all its ups and downs.

“It is the blooming time of GameFi and blockchain when several big names enter this space.” – Cuong Vu, CEO.

Indeed, Microsoft has announced its plan to acquire Activision Blizzard, one of the leading game publishers having its headquarters in California, and its venture arm led a $27M funding round for Palm NFT studio. Additionally, Square Enix, a Japanese game publishing and developing company, is also investing in blockchain games. Founder Cuong Vu recognizes that it is the ‘golden’ time for decentralized blockchain games.

Having poured a great effort and time into researching various GameFi projects, the development team found the idle-game model. It is a more straightforward approach to the generality. After long hours of market researching, they figured out the optimal play-to-earn combination, play-to-earn 2.0 with simple gameplay.

Engaging gameplay with a Play-to-earn 2.0 mechanism

MetaBomb could bring about one of the most diverse experiences in the blockchain gaming space by offering the various game modes comprising Chest Farm, Boss Hunt, Arena Battle, PvP, and Tournament. PvP and PvE game modes pack actions while idle farming delivers ease and comfort to players. The game is set to launch its testing version this April and players only need to wait a few weeks to play the official version. MetaBomb has a great competitive advantage in this area where the majority of projects solely are speculative perspectives on paper. 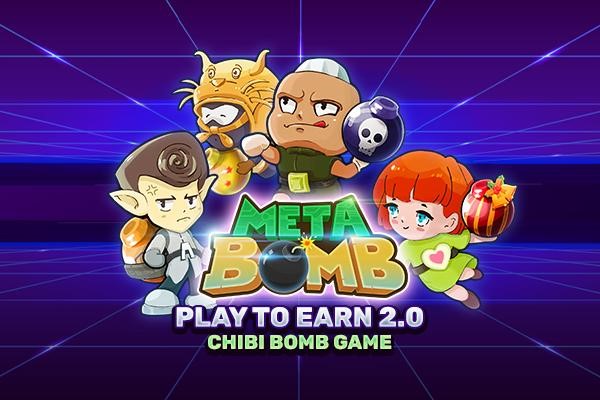 MetaBomb Plants Explosives on GameFi 2.0 in 2022

The tokenomics is another notable spot of MetaBomb in advancing to Play-to-Earn 2.0. The earning mechanism naturally follows a sinuous graph, allowing users to adjust their investment for stable income. In-game NFT items are expectedly a store of value because of their limited supply.

“The way it operates will unfold soon and promises to amaze many players,” – Cuong Vu,CEO.

He supplemented that the in-game activities and upgrading systems are tools to ensure steady funding to a balanced and healthy game economy, assuring the sustainable development of the project.

Ready to reach out the world

MetaBomb is an easy-to-play game that offers infallible gameplay for users to understand, whether they need a boost of adrenaline or to make passive income by idling. MetaBomb could potentially be a fine addition among other well-built GameFi projects.

Southeast Asia and South America are the go-to-markets for MetaBomb to acquire established play-to-earn game lovers. MetaBomb would later expand its marketing activities to North America, Europe, and East Asia.

The game’s Testnet version will be released on the BNB chain in April 2022.

Metabomb was created by Vimeta Ltd., a private and unlisted company that is located in Ha Noi, Vietnam. Contact the team at contact@metabomb.io