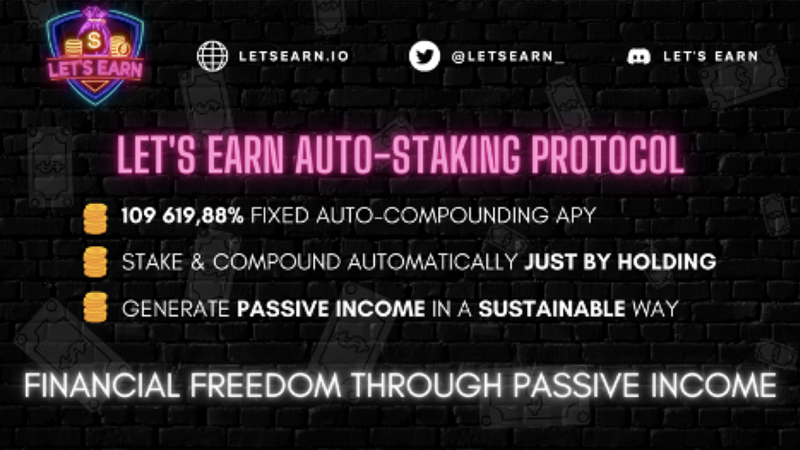 Making passive income is just a matter of holding the $LETSEARN token. With a highly improved version of the auto-staking and compounding characteristics seen on the Binance Smart Chain before, Let’s Earn is the first long-term sustainable protocol in the DeFi space.

The developers of Let’s Earn have introduced the Let’s Earn Autostaking Protocol (LEAP), a DeFi 2.0 protocol that offers perhaps the industry’s best set of benefits for $LETSEARN holders.

Holders of $LETSEARN will be able to earn high returns, due to the outstandingly high APY. In a way that is sustainable as well. This is a brand-new standard, and holders of the token, about to go into the private and public sale, will stand to earn not only rewards long-term but will also see quick short-term gains.

$LETSEARN has a fixed APY of 109,619.88% while maintaining sustainability. The protocol has also been optimized for sustain ability both short- and long-term by re-imagining auto-compounding characteristics of existing protocols.

“Sustainability will be accomplished by lowering the rebase reward times per day, this will result in Lower gas fees daily, which will make sure rebases can still be paid out at lower volumes. To make up for lowering the reward times, the holdings multiplier per rebase is a lot higher than comparable protocols. This will result in gaining profits more quickly instead of having to hold for months before the real compound effect kicks in,’’ said a spokesperson for Let’s Earn.

The supply of the token will be elastic, and the revised positive rebase formula will keep it sustained as well as stable with growing passive income. The token can be held in a decentralized wallet, like MetaMask or TrustWallet.

In the near future, investors will be able to buy $LETSEARN in a whitelisted private sale hosted on Sandwich Network. The public sale will subsequently be held on the same platform. There will be an automatic liquidity pool created on Pancakeswap after the public sale, making $LETSEARN tradeable on the market.

Investors keen to grab $LETSEARN can do so by getting themselves whitelisted for the official private sale. The steps to getting whitelisted will be released soon in the Discord channel.

$LETSEARN and the protocol have been created to offer an easy way to generate passive income just by holding the token, auto-staking, and auto-compounding will generate a high APY for investors at a sustainable pace. Keep tracking more news about $LETSEARN for the subsequent growth of the protocol.