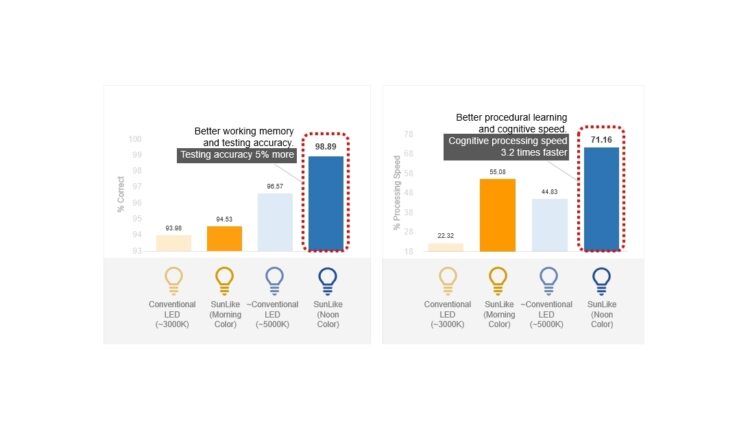 The clinical trial began in 2019, conducted by the Division of Sleep and Circadian Disorders at Brigham and Women’s Hospital, a teaching affiliate of Harvard Medical School, and included college-aged adults. The results from the study clearly showed the effectiveness of improving procedural learning.

Shadab Rahman, PhD MPH, a researcher in the Division of Sleep and Circadian Disorders at Brigham and Women’s Hospital and Assistant Professor of Medicine at Harvard Medical School, led the study along with Leilah Grant, PhD, Melissa St. Hilaire, PhD, Steven Lockley, PhD, and other researchers at the Brigham. Dr. Rahman said, “Even if the color temperature and brightness are the same, light with different spectra may affect non-visual responses to light exposure, including those of circadian rhythms and cognition, differently. In this experiment, we found improvement in working memory, cognitive processing speed, procedural learning, and testing accuracy with young adults under daylight-like light spectrum lighting compared to conventional-LED spectrum lighting. This is an important result that can inform lighting choices for indoor use to enhance students’ learning and memory function.”

The daylight-like spectrum lighting used in the study was provided by Seoul Semiconductor Co., Ltd., makers of SunLike. SunLike is an optical semiconductor technology that reproduces the natural sunlight spectrum curve, that is, the intensity of light for each wavelength of red, orange, yellow, green, blue, and purple. This new concept of LED light source embodies almost the same characteristics of natural light and is optimized for human 24-hour circadian rhythm accordingly.

There has been an increase in research activity on the relationship between light and human bio-function, including a recent scientific study focusing on the effects of light spectrum on sleep quality, visual comfort, well-being and daytime alertness conducted by Prof. Christian Cajochen and his team at the University of Basel in Switzerland, entitled: ‘Effect of Daylight LED on Visual Comfort, Melatonin, Mood, Waking Performance, and Sleep,’ published in the Journal of Lighting and Research Technology on March 24, 2019. In addition, in an experiment at Seoul National University College of Medicine in July 2018, it was demonstrated that vitality and alertness were increased when SunLike LED lighting was used.

“As the saying goes, ‘Mother Nature is great’, the human body has a 24-hour circadian clock that has evolved to set its time by tracking the daily cycle of sunlight. SunLike is a technology that reproduces all wavelengths of visible light as closely as possible to sunlight. We’ve been working on R&D over the past 30 years to optimize this technology to provide plants, animals and humans access to light that is closest to sunlight to promote healthy circadian rhythms and sleep, which can also help children and students to study effectively and maintain good health”, said Chung-hoon Lee, CEO of Seoul Semiconductor.

Seoul Semiconductor and Toshiba Materials were jointly involved in the development and release of SunLike in 2017, which has needed investment to further expand stable production and sales. As a result of continuous consultations between the two companies over the past two years to improve the speed of decision and operational efficiency for the SunLike business, Seoul Semiconductor has acquired all technologies, patents, trademarks, etc. related to SunLike, the light most similar to sunlight. Key workers from Toshiba Materials also joined Seoul Semiconductor, and they began efforts to expand sales from September.

Seoul Semiconductor is the world’s second-largest global LED manufacturer, a ranking excluding the captive market, and has more than 10,000 patents. Based on a differentiated product portfolio, Seoul offers a wide range of technologies, and mass produces innovative LED products for indoor and outdoor lighting, automotive, IT products, such as mobile phones, computer displays, and other applications, as well as the UV area. The company’s world’s first development and mass production products are becoming the LED industry standard and leading the global market with a package-free LED, WICOP; a high-voltage AC-driven LED, Acrich; an LED with 10X the output of a conventional LED, nPola; a cutting edge ultraviolet clean technology LED, Violeds; an all direction light emitting technology, filament LED; a natural sun spectrum LED, SunLike; and more. For more information, please visit www.seoulsemicon.com/en.