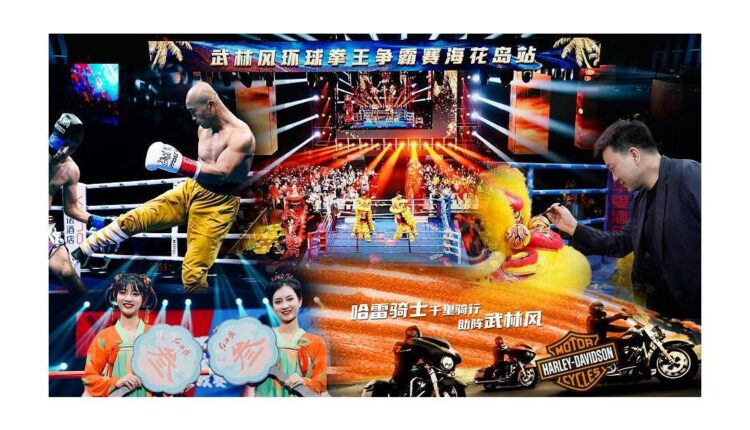 During this nearly three-hour-long live broadcast, 14 top Chinese and foreign players competed fiercely, and presented seven wonderful confrontations to the audience. Yilong’s return battle, which received much attention, became the focus of attention that night. In only 40 seconds, Yilong KO his opponent with two powerful kicks. Wei Rui, the winner of the 2020 “Golden Fist Award”, is still full of oppression in the rings. He easily knocked out his opponent, and stage the scene of the return of the king.

It is worth mentioning that this event is a fusion of kungfu culture and traditional culture revival “Guofeng Guochao”. The beloved ladies from “Night Banquet in Tang Dynasty Palace” in 2021 Henan Spring Festival Evening, appeared in the arena and turned into “Wulin babies”, which caused a sensation on the scene! Another highlight is brought by Zhengzhou Harley Cycling Group, they rode 2,500 kilometers to Danzhou, across half of China, to cheer for Chinese warriors and Yilong’s comeback.

On January 13th, 2020, Henan Broadcasting System and Danzhou Municipal Government signed a strategic cooperation agreement on the IP landing of WLF in Danzhou, seizing the policy opportunity of Hainan Island Free Trade Port and jointly creating a new benchmark for the sports industry. The cooperation between the two sides is the fusion of heavy history and exciting times, and the encounter between the central-plain wind and the sea breeze.

In the future, with the arrival of China’s top martial arts fighting event, “WLF” and Danzhou will work together to make the Haihua Island, or even the Hainan Island, to be the first “fighting island” in China, in the world.

Based on the same starting point of “fighting”, the two sides will jointly explore new scenes of cooperation with sports events, tourism and culture, and build a new highland of world-class martial arts through “integration” of Central Plains kungfu culture.