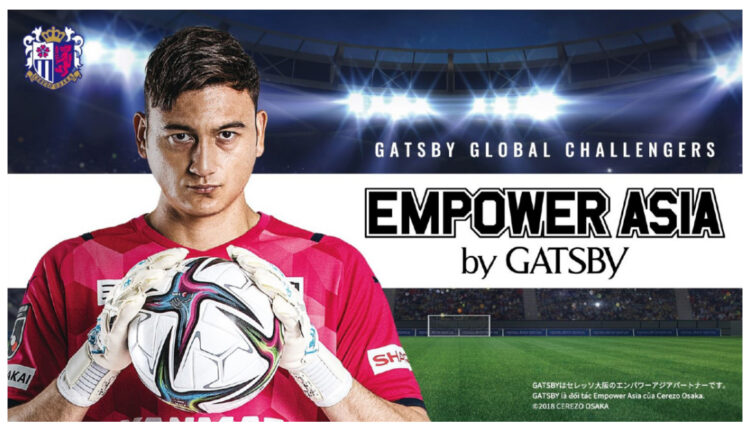 OSAKA, Japan–(BUSINESS WIRE)–Mandom Corporation (Headquarters: Osaka, Representative Director and President Executive Officer: Ken Nishimura), and its growing GATSBY brand of cosmetics for young men, launched the GATSBY GLOBAL CHALLENGERS project, hereafter, GGLC, as a way to bring courage and energy to the people of Asia during this time of pandemic, working with young athletes active on the global stage. Mandom reports that Dang Van Lam, the Vietnamese goalkeeper for the J.League’s Cerezo Osaka, will join Thirdy Ravena, a player for the SAN-EN NEOPHOENIX B.League basketball team appointed as an ambassador last year, as a new project ambassador for the GGLC project.

The growing spread of the COVID-19 pandemic has continued to hit sports hard, but we also continue to believe that sport not only brings the hope of energy and excitement to people, it also possesses an embodiment of the strength needed to overcome challenges.

GATSBY, a brand that has grown in the twelve countries and regions of Asia, and which has continued to be there for young men, wholeheartedly supports not only athletes who leave their homes to compete within sports with both passion and pride, as well as the teams who have chosen those athletes. The GGLC project in 2020 was begun to bring courage and energy to the people of Asia for the EMPOWER ASIA message.

With no clear end to the pandemic in sight, it is time to double down on our efforts and amplify Mandom’s message to the people of Asia. Cerezo Osaka shares in Mandom’s desire to use sports to bring courage and energy to the people of Asia, and with the signing of Empower Asia Partnership Agreement, Dang Van Lam left Vietnam to play soccer in a foreign country, has been chosen as a new ambassador. This is the first opportunity for J.League to share a message of support with the people of Asia in the midst of the pandemic.

Mandom’s top partnership agreement with SAN-EN NEOPHOENIX has also been renewed, and Thirdy Ravena will continue to serve as our project ambassador. Mandom’s hope is that this project will be a sense of optimism not only to young men but to all of the people of Asia.

Collaborations with Cerezo Osaka and with Dang Van Lam

Note: Details will be posted to the official website and to social media accounts when decisions are made.

As the starting goalkeeper for the Vietnam national team, he boasts an immense popularity. As the first Vietnamese goalkeeper for the J.League, he was inundated with messages of fan support locally and from his home country, when the Emperor’s Cup on June 9, 2021, his first cup match after arriving in Japan, was streamed live on YouTube. Japanese fans were impressed mightily by the magnitude of his popularity back in Vietnam.

I’m really happy to see Mandom and Cerezo Osaka enter into the Empower Asia Partnership Agreement. As Vietnam, my home, and the rest of Asia struggle with the massive impacts of the pandemic, I join Mandom in their desire to use sports to bring courage and energy to the people of Asia. Starting in November, I will serve as a GGLC Project Ambassador as part of the Empower Asia Partnership Agreement for Cerezo Osaka. I hope I can help the GGLC project to achieve further success through my own performance for Cerezo Osaka.

The original source-language text of this announcement is the official, authoritative version. Translations are provided as an accommodation only, and should be cross-referenced with the source-language text, which is the only version of the text intended to have legal effect.