Sydney, Australia, Aug. 30, 2021 (GLOBE NEWSWIRE) — Fantom Foundation, one of the fastest growing layer-1 blockchain platforms, has announced a new incentive program, a first of its kind rewards scheme to encourage developers and projects to build on Fantom. With this new initiative, Fantom has committed a total of 370 million FTM (in today’s value 300 million US dollars) to distribute to protocols developed on Fantom. The program applies to both new and existing projects on Fantom. 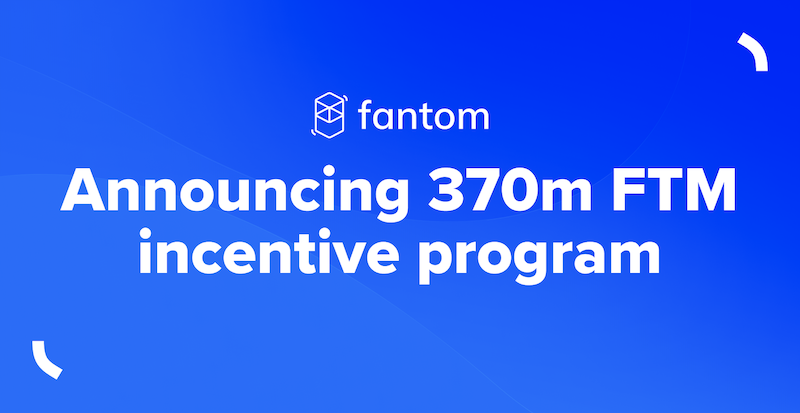 Fantom,a fast and scalable layer-1 smart contract platform, has been showing significant increase in deployment of DeFi projects over the past few weeks. Fantom has been gaining massive traction for its 1 second transactions and near-zero fees making it a favorite platform among developers who are building the next generation of DeFi projects.

“We’ve seen a lot of exciting things going on in regards to liquidity mining. So exciting, that even other foundations behind their respective chains started to provide rewards to users of protocols willing to deploy on top of their chain. We’ve been asked to do the same, but we believe that playing by the book doesn’t warrant different results. Therefore we have decided to introduce a different kind of program to better align incentives between users, builders, and the network.” adds Simone Pomposi, head of Marketing at Fantom Foundation.

Rather than playing favorites and providing the majority of resources to a handful of protocols, Fantom is opening this up to every dev team that will deploy on Fantom. Which will make massive interest in developing on Fantom. Project teams then can best decide how to use the rewards. The team believes builders are the best ones to judge where the funds should be utilised, whether they should be provided to build the protocol, or if they need to be used to reward users in the community for liquidity mining.

The process and requirements are as follows:

A protocol team can apply for rewards if the TVL on that protocol can stay above a time-weighted-average of $5,000,000 or $100,000,000 for an extended period of time.
Protocol teams can provide information about the protocol through the submission form provided by Fantom with a publicly-verifiable team address (preferably a multi-sig), and a DeFiLlama link to track TVL.

Once the Foundation has approved the application, a two-month long cliff commences, after which rewards will start to vest on a monthly-basis.

The total value locked in Fantom’s DeFi platforms has surged to over $600 million and as a result of Fantom’s popularity and acceleration in adoption is seeing huge increase. Its native token FTM was recording significant gains over the last couple of weeks. To make things even more exciting the team has brought this new initiative to encourage more developers and projects to build on Fantom.

This new incentive program sets a new phase of Fantom DeFi, successful projects on other chains will now be eager to join the FTM movement either by switching to Fantom’s superfast network or by deploying to Fantom as well to make sure they have a presence on one of the fastest growing DeFi ecosystem.

More details can be found at: https://fantom.founation