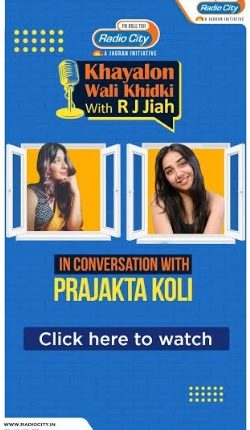 Radio City, India’s leading radio network recently launched its new show, ‘Khayalon Wali Khidki‘ with RJ Jiah. The channel kickstarted the show with multi-talented actor, influencer and former RJ, Mostly Sane aka Prajakta Koli who recently won the prestigious Daytime Emmy Awards for Outstanding Daytime Non-fiction Special which focusses on Michelle Obama. The show features celebrity guests sharing inspiring anecdotes of their journey, struggle and what kept them going. At a time when the world has been plagued in the clutches of the deadly pandemic, the show serves as a platform that urges people to stay strong as they tide over their prevalent struggles and focus on the silver lining.

Confessing that she is a very nervous person in life and feels overwhelmed all the time, Prajakta opened up about how she allows freedom and liberty to flow, without limiting herself or her creativity. Taking listeners through her journey from an intern to becoming one of India’s most loved YouTuber and Netflix stars, she revealed that consistency got her through her toughest periods, along with loved ones and her team. A favorite amongst the millennials, she recounted all the key moments in her incredible transition that she truly is grateful for, one of them being her prestigious collaboration with Michelle Obama for an empowering project.

In her heartwarming style, Prajakta gave us a peek into her refreshingly real personality, which lies hidden under her quirky, funny, and hilarious public persona. Talking about her incredible success as a YouTuber and OTT star after leaving radio, she added, “Timely failure provides the right direction towards success,“ adding with candor that she was not fearful of failing as she started at a place where it could not have gotten worse. She urged people to stay strong by powering through the low phases in life and not get disheartened with setbacks stating, “You win some, you lose some, there is no fixed blueprint to success in one’s creative journey.“

Mr. Kartik Kalla, Chief Creative Officer, Radio City said, “The greatest thing about Radio is the unmistakable emotional depth of the medium. Its ability to touch lives and hearts, which is what Khayalon Wali Khidki is all about. We are glad to open the show with Prajakta Koli, a celebrity known for her vivid persona and authenticity which is a perfect example of the kind of content we wish to bring to our listeners everywhere.”

Sharing her excitement, Prajakta Koli said, “It was great talking to RJ Jiah on Radio City’s Khayalon Wali Khidki. Thank You for inviting me for a truly heartwarming chat. It is always amazing when two people who are passionate about things sit down and have a conversation. I hope the listeners enjoy listening to us.”

The host of Khayalon Wali Khidki, RJ Jiah is a very popular voice across Indian Radio, and is known for her unique outlook on life and relationships. Owing to her immense appeal, Khayalon Wali Khidki videos have become viral, having received more than 4.2 million views on all the virtual platforms of Radio City combined. They are especially popular on WhatsApp, due to their strong emotional and motivational themes. Radio City is promoting the show Khayalon Wali Khidki on its YouTube channel as well as through social media posts and stories on platforms like Facebook, Twitter & Instagram.

Click here to watch the interview with Prajakta Koli – www.youtube.com/watchv=_jzxFzBPGR4

Music Broadcast Limited currently has 39 stations across 12 states, comprising 62% of the country’s FM population. Radio City reaches out to over 69 million listeners in 34 cities covered by AZ Research 2019 (Source: AZ Research Report). The network provides terrestrial programming along with 17 other web-stations, through its digital interface, www.radiocity.in.

Radio City has spearheaded the evolution of FM radio by offering content that is unique, path-breaking, and invokes city passion amongst listeners with its brand philosophy of “Rag Rag Mein Daude City“. The network introduced humor and the concept of agony aunt on the radio with Babber Sher and Love Guru, respectively. It also initiated Radio City Freedom Awards, a platform to recognize independent music, and provided a launchpad to budding singers with Radio City Super Singer, the first singing talent hunt on Radio.

Radio City bagged 85 awards across national and international platforms like Golden Mikes, India Radio Forum, New York awards, ACEF awards, etc. in FY 2019-2020. Radio City has consistently featured for the 7th time in ‘India’s Best Companies to Work For‘ study conducted by Great Place to Work Institute. Radio City has also been recognized in ‘India’s Best Workplaces for Women – 2019‘ and has ranked amongst the Top 75 organizations on the list. In 2020, Radio City ranked 4th in ‘Best Large Workplaces in Asia‘, according to the GPTW survey.