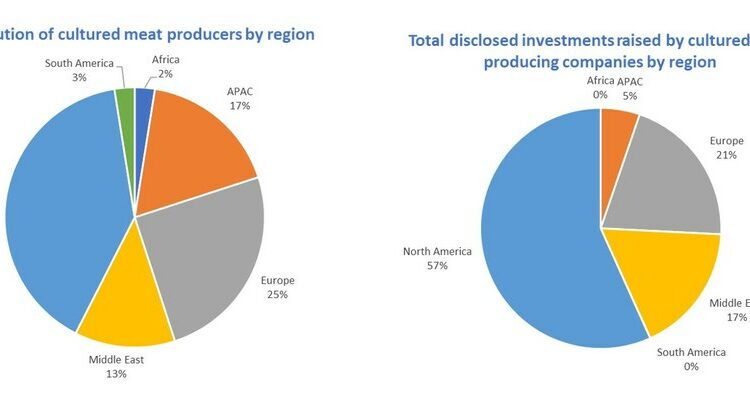 BOSTON, Oct. 26, 2021 /PRNewswire/ — Cultured meat has come a long way since 2013. What was once a concept from the realms of science fiction, made in tiny quantities in research labs for astronomical costs has now become an emerging industry, with start-ups across the world racing to become the first to successfully produce cultured meat on a commercial scale. Companies are now routinely carrying out taste tests of cultured meat products and, if you were lucky enough to get a reservation at the 1880 restaurant in Singapore in early 2021, cultured chicken nuggets could even be ordered, following the regulatory approval for cultured meat produced by Californian start-up Eat Just, Inc.

Cultured meat, otherwise known as cultivated meat, cell-based meat, or clean meat, is an emerging technology area that involves using cultured animal cells to create meat-like food products. Unlike plant-based meat or other meat analogs, cultured meat is produced from the same cells as conventional meat and can theoretically provide an exact replica of the real thing, without requiring animal slaughter and at a fraction of the environmental cost. Over the last few years, enthusiasm around the cultured meat industry and its potential to disrupt the $1 trillion conventional meat industry has been growing. Since 2015, the sector has raised over $600 million in funding, growing from less than five companies to over fifty in the same time frame.

There are now cultured meat companies on every continent, other than Antarctica, and cultured meat has even been produced in space (more on that later). This article takes a look at the global picture of cultured meat, exploring how the emerging technology is evolving across the world. “Cultured Meat 2021-2041“, a new report from IDTechEx, explores the world of cultured meat, providing regional level analysis on markets and regulations and forecasting the next 20 years of the cultured meat industry.

Home to industry heavyweights such as Eat Just, UPSIDE Foods (formerly Memphis Meats), and BlueNalu, the US is the undisputed powerhouse of the cultured meat industry. Mostly stemming from the activity of US companies, North America has seen a surge of investor funding, with the region being overrepresented in terms of money raised – despite only having around 40% of the world’s cultured meat companies, North America has seen 57% of the fundraising.

This investor enthusiasm stems in part from the growing popularity of meat alternatives in the US. For example, the US plant-based meat industry has grown rapidly over the last five years, stemming from increasing consumer awareness around health and nutrition and concerns over the sustainability of the global meat industry, something that has been accelerated by the COVID-19 pandemic (for more analysis of the global plant-based meat industry, see the recent IDTechEx report “Plant-based Meat 2022-2032“). Cultured meat may be the next step in the journey away from conventional meat, with cell culture theoretically being able to provide exact replicas of conventional meat, right down to the molecular level, but at a fraction of the environmental cost.

Reflecting the high levels of funding, North American cultured meat companies are among the most commercially developed. Cultured seafood producer BlueNalu is constructing a 40,000 square foot pilot facility in San Diego, with the aim of launching a commercial product in the US this year, and California-based Eat Just is the first cultured meat company in the world to have received regulatory approval for one of its products, a cultured chicken bite that was approved for commercial sale in Singapore in 2020.

North America may even become the second-region to approve cultured meat for commercial sale. The US is heavily rumored to be in the final stages of approving a cultured meat product for commercial sale in the country, likely a cultured seafood product. Cultured seafood is likely to have the simplest path to regulatory approval in the US, as it is set to be solely regulated by the FDA, rather than the fairly complex arrangement between the FDA and USDA for approval of other cultured meat products.

However, as of October 2021, these are still rumors and there have been no formal announcements to suggest that cultured meat could be hitting stores and restaurants any time soon in the US. Nevertheless, many in the industry are optimistic – a US regulatory approval would be enormous for the cultured meat industry and would likely see a flood of new money entering the space. US approval would also influence the approval processes in other regions, particularly following a safe and successful market entry.

Despite all the industrial activity in the US and North America, it was Asia that captured the headlines around cultured meat in late 2020 and early 2021 as Singapore became the first region in the world to approve cultured meat for commercial sale in December 2020.

The Singapore Food Agency (SFA) granted approval for cultured chicken produced by Eat Just to be sold in Singapore as an ingredient in nuggets produced by the company. The Singaporean government has historically been supportive of the cultured meat industry. To improve the country’s food security, in 2019 the Singaporean government set up the “30 by 30” goal, with the aim of producing 30% of the country’s nutritional needs locally by 2030, using technologies including vertical farming and alternative proteins.

Following the regulatory approval, Eat Just carried out a limited commercial release, providing “chicken” bites containing a blend of plant-based proteins and cultured chicken cells to one local restaurant. Although the release was more of a proof-of-concept than a serious attempt at commercialization, with Eat Just losing money on each chicken bite sold, the release generated much excitement, both in Singapore and across the wider world. Eat Just has since raised $170 million to focus on scaling up its cultured meat production ahead of a wider release across the country.

Outside of Singapore, the picture is a bit less optimistic for the cultured meat industry across the Asia-Pacific region. Despite studies suggesting that East Asian consumers may be more willing to try cultured meat than their US counterparts, the region remains comparatively underfunded – although the Asia-Pacific region has 17% of the world’s cultured meat companies, it has only seen 5% of global investor funding into the industry. The regulatory situation is also unclear – outside of Singapore

Moving away from Asia-Pacific but still staying in Asia, Israel has been a particular focal point for the cultured meat industry. Much like Singapore, food security is a significant concern in Israel, and the country is home to several cultured meat start-ups, including cultured steak producers Aleph Farms and cultured chicken producers Future Meat. Although cultured meat is not approved for commercial sale in the country, consumers can even apply for a table at SuperMeat’s “The Chicken” restaurant, where they can taste a prototype cultured chicken burger, although they are not allowed to pay for it.

Europe has also seen significant activity in the cultured meat space. The industry was effectively founded here when Dr Mark Post of Maastricht University in the Netherlands demonstrated the world’s first cultured meat prototype in 2013 to a room full of journalists in London. Mosa Meat, the company formed from his research, has since become one of the largest companies in the space, having raised almost $100 million in disclosed investment funding.

Europe is now the second largest region in terms of the number of cultured meat companies and levels of funding raised, behind North America (although it is third if Asia-Pacific and the Middle East are considered as one region).

However, cultured meat is still probably some distance away from commercial release in the region. It is likely that there will be intense arguments over labeling of cultured meat products, similar to those seen around plant-based substitutes. In the EU, plant-based producers are banned from calling plant-based products “yogurt” or “milk”, and some member states have gone even further – France does not allow the use of meat terms like “steak” or “sausage” to describe products, following meat industry lobbies claiming that these terms confuse customers.

Additionally, consumers and regulators in Europe have historically been hostile to biotechnology in food. Even now, it is almost impossible to release a food product containing genetically modified organisms (GMOs) in the region, and the EU has indicated that it will take a hostile regulatory stance towards the use of gene-editing technologies such as CRISPR-Cas9 in food. Without a change in regulatory attitudes, there is a risk that the EU will be left behind in the next generation of innovative food products.

The rest of the world

Although North America, Asia, and Europe have seen the most activity, cultured meat is truly a global phenomenon. In South America, Argentina-based Cell Farm Food Tech has become the first cultured meat start-up to be founded in the region, while a Brazil-based meat producer recently partnered with Aleph Farms in a push to bring cultured meat to the region.

In Africa, Cape Town-based Mzansi Meat is hoping that its local networks and understanding of African culture will enable it to gain a foothold across the continent. However, challenging cost pressures and a lack of established supply chain infrastructure mean that a successful African commercial release remains a daunting prospect.

Although the technical barriers to producing cultured meat in space are formidable, space exploration may (eventually) be an ideal market for cultured meat. Food variety and choice is currently extremely limited in space travel, with crew members often losing weight and struggling to achieve adequate nutrition over long missions. This could become a major issue for long-term space missions, such as manned trips to Mars, and could limit the appeal of space tourism over the coming decades.

Bioregenerative food systems, i.e., systems that produce fresh food in situ, could provide the necessary nutrients needed for the crew’s survival as well as enhancing the psychological wellbeing of the crew. Cultured meat could play a major role here – large quantities of tissue can be produced from a small number of starter cells and the components of growth media can be easily transported in powdered form and reconstituted with water on the production site.

The world of cultured meat is evolving rapidly, with the industry looking very different depending on location. For a detailed global perspective on the cultured meat industry, see the recent IDTechEx report “Cultured Meat 2021-2041“