SAN JOSE, Calif., Nov. 15, 2021 /PRNewswire/ — (IICA) – Economist and University of California at Berkeley professor David Zilberman, a leading voice on building the concept of the bioeconomy as a vision for development, was awarded the title of “IICA Chair in Bioeconomy and Sustainable Development”. 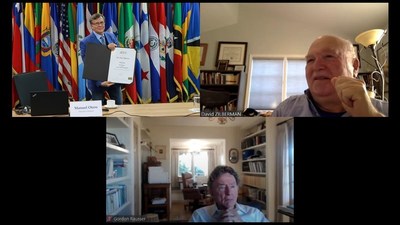 In a virtual ceremony, Manuel Otero, Director General of the Inter-American Institute for Cooperation on Agriculture (IICA), bestowed the title on Zilberman, author of countless books on alternative energies and, in particular, on biofuels as the basis of a new energy matrix that is better aligned with the environmental concerns of our time.

Gordon Rausser, internationally acclaimed economist and specialist in agriculture and Distinguished Professor Emeritus at UC Berkeley; Beverly Best, Director of External and Institutional Relations at IICA; and Jorge Werthein, Special Advisor to the Director General of IICA, also participated in the ceremony.

Zilberman is a professor in the Agricultural and Resource Economics Department at UC Berkeley. His areas of expertise include agricultural and environmental policy, the economics of innovation, biotechnology and climate change.

From his position at the university, he has advocated for the bioeconomy as a source of opportunity to leverage the development of the rural areas of the Americas and accelerate post-COVID-19 economic reactivation.

The bioeconomy is a vision that promotes smart industrialization using biological resources, which are converted into value-added products, such as bioproducts, bioenergy and services. It also seeks to tackle existing environmental challenges by mitigating the effects of climate change and reducing the use of fossil fuels.

“I am very honored by this recognition. When I visited IICA for the first time 20 years ago for a debate on climate change, I admired the Institute’s vision and thought that one day I’d like to be a part of it”, expressed Zilberman.

The academic explained that today agriculture faces a number of simultaneous challenges, such as dealing with climate change, ensuring food security, improving crop quality and being a source of income for millions of small-scale farmers, and believes that IICA’s cooperation makes an important contribution to confronting them.

Zilberman maintained that organic agriculture can play only a limited role, as it is unable to produce food that is accessible to everyone. Instead, he stated the need to increase productivity through the tools of biology, which are also capable of preserving natural resources and confronting the effects of climate change.

“We must make the transition to renewable energies and stop depending on fossil fuels. Biology has an incredible capacity to generate resources and we must expand our knowledge. Soils can produce food, chemicals and biofuels; this is especially true in the Americas, with its unique environment”, he added.

Zilberman recommended promoting public-private investment, building capacities and attracting investment in order for the continent to leverage the full potential of its biological resources.

For his part, Gordon Rausser, a prestigious colleague of Zilberman’s, summarized Zilberman’s myriad academic achievements, starting in 1979 when he completed his doctorate.

“His many achievements include being the first economist to receive the Wolf Prize in Agriculture in 2019”, stated Rausser. The Wolf Prize is considered the equivalent of a Nobel Prize in agricultural research and development.

Rausser shared that he has known Zilberman for 40 years and praised his versatility in making significant contributions to a number of disciplines, his participation in different associations and his predisposition to accompany students who are just starting their careers. “His work has benefitted us all. He couldn’t be a better colleague and friend”, he concluded.

Beverly Best expressed that Zilberman is a new member of the IICA family and explained that the “IICA Chair” Program was created in 2018 with the mission to provide technical cooperation of excellence focused on generating knowledge that will transform agriculture and contribute to rural development in the Americas.

“The program is intended to improve the visibility of innovative ideas, build the capacities of stakeholders in the public and private sectors and facilitate the exchange of knowledge and experiences”, she added.

In turn, Otero explained that over the last few years, IICA has seen direct proof of the magnitude of Zilberman’s contributions and his personal attributes.

“Together, we have developed various activities that have significantly contributed to the development of the bioeconomy in our region. I’m referring specifically to Dr. Zilberman’s participation in a series of academic-political dialogues that we organized during the COVID-19 pandemic, as well as our joint preparation of the document ‘Potential of the Bioeconomy to Transform Food Systems’, through which we contributed to the work of the Scientific Group established within the framework of the recent United Nations Food Systems Summit”.

Otero mentioned that prior to Zilberman, other IICA Chair recipients are Elizabeth Hodson, Professor Emeritus at Pontificia Universidad Javeriana; Rattan Lal, Professor of Soil Science and Director of the Center for Carbon Management and Sequestration at Ohio State University; Roberto Rodrigues, former Minister of Agriculture of Brazil, Coordinator of the Agribusiness Studies Center at Getúlio Vargas Foundation and Professor of Agribusiness at the Luiz de Queiroz School of Agriculture at the University of Sao Paulo; and the Agricultural Plant Physiology and Ecology Research Institute (IFEVA) of the School of Agronomy at the University of Buenos Aires, Argentina.

Marqeta Study: Australians Lead the Way in Digital Payment Use, as Mobile Wallet Use…