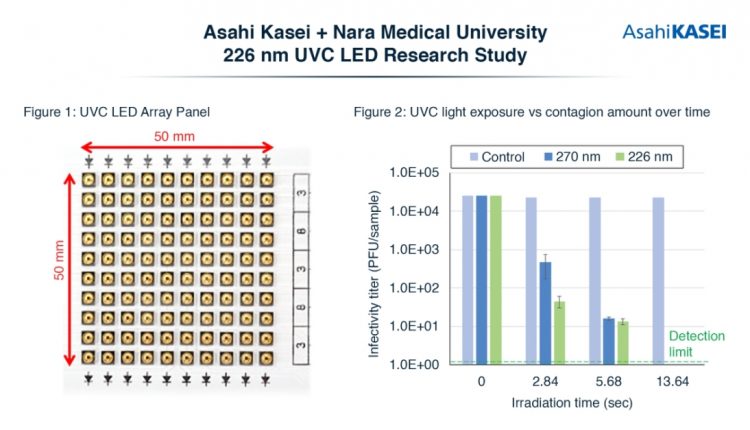 GREEN ISLAND, N.Y. & TOKYO–(BUSINESS WIRE)–Asahi Kasei announces the results of joint research with Nara Medical University regarding the efficacy of 226 nm ultraviolet-C (UVC) LEDs in the inactivation of the coronavirus (SARS-CoV-2) that causes COVID-19, and its effects on animal skin cells. This is the first study in the world conducted with LEDs of this wavelength, and the results confirm that the 226 nm UVC LEDs are able to quickly inactivate SARS-CoV-2 while having significantly less effect on animal skin cells than 270 nm UVC LEDs.

The inactivation (killing) of viruses and other pathogens using UV light rather than chemical disinfectants has drawn greater attention with the COVID-19 pandemic. Nevertheless, it has been necessary to prevent light from conventional mercury UV lamps (254 nm) and UVC LEDs (260–280 nm) from directly irradiating human skin due to risk of harmful effects. In contrast, UV excimer lamps with a wavelength of 222 nm were introduced last year showing negligible effect on the human body. However, LEDs are more compact and allow greater flexibility in design, have less risk of breaking, and have a quicker startup time than traditional lamps, opening up new potential for smaller, safer, and more responsive applications of UVC light.

Crystal IS, Inc., an Asahi Kasei company, has commercialized Klaran™ UVC LEDs in the 260–270 nm wavelength range, and is now supporting the advanced research by Asahi Kasei to reach shorter wavelengths. Recently, Asahi Kasei’s Corporate Research & Development was able to create 226 nm UVC LED prototypes, and tests were conducted for these LEDs regarding their efficacy for inactivating SARS-CoV-2 as well as their effects on animal skin cells.

One hundred of the 226 nm UVC LEDs were placed on a panel in a 10 × 10 array as shown in Figure 1. For comparison, a similar array of 270 nm UVC LEDs was also prepared. All of the UVC LEDs used in this study were created from the proprietary aluminum nitride (AlN) substrate and pseudomorphic aluminum gallium nitride (AlGaN) technology of Crystal IS.

The above results indicate that 226 nm UVC LEDs can quickly inactivate SARS-CoV-2 while having significantly less effect on animal skin cells compared to the current generation of 270 nm UVC LEDs for disinfection. This suggests the possibility that 226 nm UVC LEDs may be safely used to disinfect hands or objects where there are people nearby. Moving forward, further advancements in technology will be necessary before the power of the light emitted from 226 nm UVC LEDs can be improved enough for commercialization. Continued research development by Asahi Kasei is progressing to make this possible.

*1 Plaque technique: A method of measuring virus volumes after the degeneration of virus infected cells.

*2 MTT reagent: Tetrazolium salt. Becomes colored when enzymes within the mitochondria are deoxidized indicating that the cells are still viable.

The Asahi Kasei Group contributes to life and living for people around the world. Since its foundation in 1922 with ammonia and cellulose fiber businesses, Asahi Kasei has consistently grown through the proactive transformation of its business portfolio to meet the evolving needs of every age. With more than 40,000 employees around the world, the company contributes to a sustainable society by providing solutions to the world’s challenges through its three business sectors of Material, Homes, and Health Care. Its health care operations include devices and systems for acute critical care, dialysis, therapeutic apheresis, transfusion, and manufacture of biotherapeutics, as well as pharmaceuticals and diagnostic reagents. For more information, visit www.asahi-kasei.com.

Crystal IS, an Asahi Kasei company, is a pioneer in the development and commercialization of UVC LEDs based on its proprietary Aluminum Nitride substrate technology. Devices grown on Aluminum Nitride can more effectively (technically and economically) emit at deeper ultraviolet (UVC) wavelengths than devices grown on sapphire. Crystal IS products are used to produce high performance UVC LEDs for disinfection and environmental monitoring in a variety of applications that enhance and sustain life and living around the world. www.cisuvc.com

CareerLabs Partners with AICTE for the NEAT 2.0 Initiative Under the Education Ministry to Make Profile Building Available for More than 2 Lakh Students Across India

urban-gro, Inc. Appoints Sonia Lo to Board of Directors