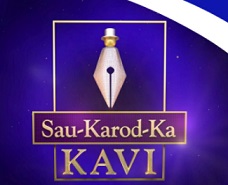 
The show judged 40 Hindi poets selected from all over India. Apart from Amandeep, the finalists included Rajat Sood, Shweta Singh and Vinit Shankar. 26-year-old Amandeep Singh hails from Patna and is an engineer by profession, working with an IT company in Bengaluru. As a passionate performance storyteller and poet, he repeatedly impressed the judges with his quintessential prowess with words. Along with his knowledge in different forms and format of poetry (Ghazal, Nazm, Spoken Word etc.), his presentation skills also gave Amandeep an edge over other contestants. He remained a consistent top scorer throughout the show and received seven times standing ovation from the judges.


On winning the most coveted title, Amandeep Singh says, ‘’It’s a great feeling. A show like this happened for the very first time in India and winning it is still unbelievable for me. More shows like this should be made going forward. This will give the much needed platform and recognition to the emerging poets and storytellers. I’m thankful to the judges for their appreciation and belief in me and grateful for all the love that I have received in the show.’’


Gaurav Gera, the actor and comedian, known for ‘Jassi Jaisi Koi Nahi‘ and ‘Shopkeeper…Hanji Bhenji‘ fame hosted the show. Gajendra Singh, popularly known as the Reality Show King, is the producer of the show. He is known for Close-Up Antakshari, SaReGaMa, Amul Music ka Maha Muqaabla, Voice of India and Sur Kshetra.