New York, New York, April 05, 2022 (GLOBE NEWSWIRE) — Acardex has consistently garnered momentum since its establishment as a Cardano dex project, it has recorded full project development in a very short time. Acardex team of developers is aimed at solving cardano’s concurrency problem by allowing many transactions to be executed at the same time.

Acardex is vital for the entire blockchain sector, and it is possible that it may become top choice DEX on the Cardano blockchain. With the public launch approaching, they anticipate a huge increase in activity in the following weeks and months.

On the other news, their team of lead developers are working on the launch of acardex metaverse which would include the acarde motor racing, P2P competition and so many more. The Acardex team will share more information on many of the features as they expect to launch in the coming months, as well as critical updates on the company’s roadmap and the continued evolution of the technology stack. 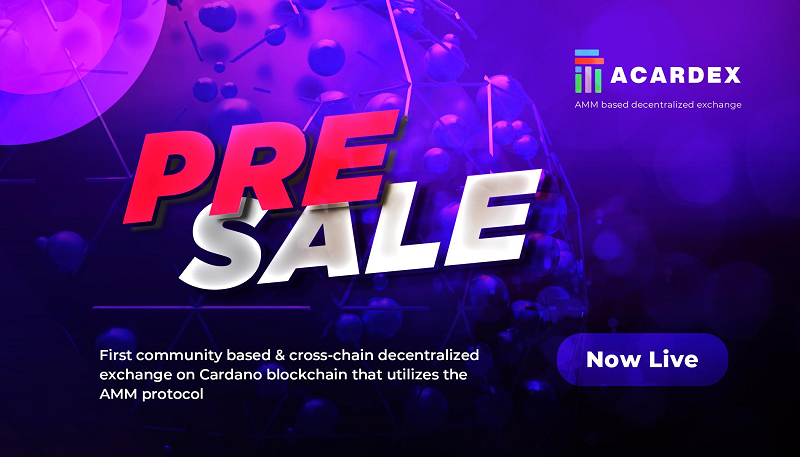 The Acardex Labs has made a progressive success in the past weeks which includes distribution of ACX tokens to seed buyers, security audit on acardex project, launch of acardex dex demo and other new updates which will be announced in due time.

Acardex will be a key to unlock liquidity for the Cardano ecosystem in a completely decentralized and non-custodial manner. The trading and monetization features of Acardex decentralized exchange will be based on AMM (Automated Market Maker) protocol to ensure a fast, trust-worthy, and powerful liquidity upgrade.

This will facilitate the trades initiated by users not to be matched with others using order books, rather users will be trading with each other by locking their assets into a liquidity pool and earn rewards from trading fees.

With a working DEX, Acardex will be offering a very transparent, swift, secured & low cost of transactions, elimination of the need for complex UI/UX, scarping off intermediaries while ensuring that users have express right to trade on our platform without any form of censorship, or loss of assets through hacks.

Acardex Ecosystem is powered by its token $ACX, which is used to facilitate transactions on the platform. Holders of the token are also given the opportunity to become decision makers and vote to endorse future features to be implemented on the platform.

To participate in the On Going Pre Sale, users should only use Cardano native wallets like Yoroi Wallet, Daedalus Wallet, Nami Wallet or Adalite Wallet.