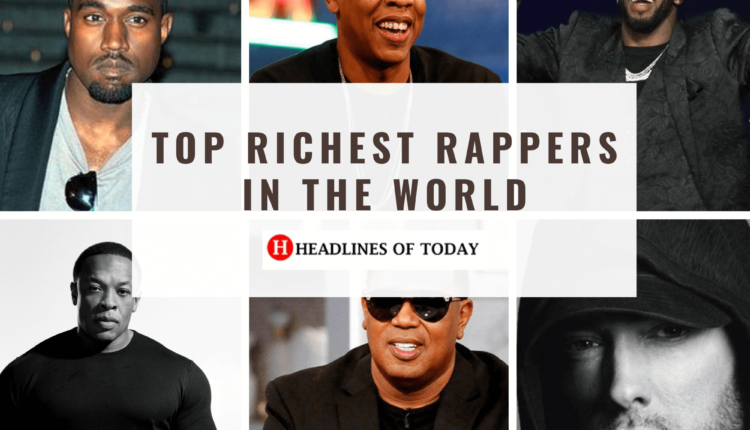 Richest Rappers In The World? In 2020? Ever searched on Google? It’s not easy to get the hat of the richest rapper in the world as it requires sheer hard work, dedication and definitely smartness! Some rappers you know definitely and for some rappers, the net worth will just wow you. Some are not just only in the music industry but also have side business which has helped them to build a huge empire.

Singer, songwriter, record producer from New Jersey, Akon rose to prominence in 2004 with his first single “Locked Up” from his debut album Trouble (2004). He has four songs certified as 3× platinum, credited with more than 35 Billboard Hot 100 songs. With more than 10 songs certified as gold in digital sales help him to write his name in five Grammy Awards nominations. He became the number-one selling artist and was listed by the Guinness Book of World Records for master ringtones in the world.

Rapper, musician, DJ, record producer, Timbaland has received widespread appreciation and credits for his production style. As of 2014, he has written 99 hits Stateside and 85 UK hits as a songwriter. His signature: high-end synth stabs, stuttering bass-heavy bounce beats, and his own quiet murmuring beneath each track. This undoubtedly shaped the pop and hip-hop genres and brought attention internationally. ‘Pony’ sound shocked the world and gradually became the popular pop music style.

American rapper, actor and guitarist, Ad-Rock started off his career in the punk rock band The Young and the Useless and later joined Beastie Boys band. Beastie Boys had sold 22 million records by 2010 in the United States alone, and 40 million worldwide. He has featured in the Have a Good Trip documentary in 2020.

American rapper, singer, songwriter, Pitbull has sold over 100 million singles and 7.5 million studio albums worldwide. The Spanish-language album “No Lo Trates” featuring Natti Natasha and Daddy Yankee became RIAA Latin certified 6x Platinum with more than 360,000 sales. He performed the song “We Are One (Ole Ola)” along with Claudia Leitte and Jennifer Lopez, which served as the official theme of the FIFA World Cup 2014.

American rapper, Birdman is a public face of Cash Money Records which has sold 50 million records in the history of hip-hop music. He has released a various collaboration album with Lil Wayne and Juvenile which went hits.

American hip hop recording artist, record producer, DJ, art collector, Swizz Beatz has gained recognition in the industry through his work with East Coast rapper DMX and Ruff Ryders Entertainment record label. He went on to sign multiple artists to the label, including Mashonda, Eve, and Bone Thugs-n-Harmony. He was called the best rap producer of all time by Kanye West.

American rapper, record producer, LL Cool J (short for Ladies Love Cool James) is known for hip hop hits such as “I’m Bad”, “Going Back to Cali” and “The Boomin’ System”. He is a two-time Grammy Award winner and became the first rapper to receive the Kennedy Center Honors. He currently plays a role of NCIS Special Agent Sam Hanna in the NCIS: Los Angeles, CBS crime drama television series.

American singer, rapper, songwriter, fashion designer, Pharrell Williams has won 13 Grammy Awards and several nominations. He has also invested in several business ventures which have helped him to earn hefty dollars. He was featured on Daft Punk’s 2013 single “Get Lucky” that has sold more than 9.3 million copies and reached the top 10 in the music charts of over 32 countries.

American rapper, singer, songwriter, Lil Wayne is regarded as one of the most influential hip hop artists of his generation. He has sold over 120 million records worldwide, making him one of the world’s best-selling music artists, including more than 37 million digital tracks and 15 million albums in the US, United States. He has won five Grammy Awards, four Billboard Music Awards, 11 BET Awards, eight NAACP Image Awards and two MTV Video Music Awards.

American rapper, actor, and filmmaker, Ice Cube first gained fame as a member of hip hop group NWA in 1996. He is also an actor with notable appearances on film includes 21 and 22 Jump Street, Barbershop movies and the Ride Along with series. He has his own fashion line named as Solo by Cube which features hooded sweatshirts and many fashionable items.

American singer, songwriter, Usher has sold 38.2 million digital songs in the United States and has sold 100 million records worldwide. He is considered an icon and sex symbol from a young age. He has been referred to as the “Mr Entertainment” and “King of R&B” by media outlets. His music continues to inspire R&B, rap, and pop artists. Usher has won numerous awards including eight Grammy Awards, nine Soul Train Music Awards, 34 ASCAP Awards, and eight American Music Awards.

American rapper, actor, record producer, Master P is the founder of the record label No Limit Records. He is also known for his business acumen and collaborations with other business ventures. His deep-toned, aggressive enunciation is what makes him unique and his story-telling rhymes focusing on poverty, drugs social injustice, police brutality, drug dealing, and hope has inspires many.

American rapper, songwriter, and record producer, Eminem who is in the music industry for over 20 years are the greatest hip-hop artists of all time. He has also made cameo appearances in the films Funny People (2009), Wash (2001), and The Interview (2014). Belongs to the best-selling music artists with global sales of over 220 million records. He has won 15 Grammy Awards, 17 Billboard Music Awards and eight American Music Awards.

American rapper, record producer, audio engineer, Dr. Dre is the founder of Aftermath Entertainment. Dre’s solo debut studio album The Chronic (1992) is one of the best-selling 1993’s American music artists. He has won six Grammy Awards, including Non-Classical, Producer of the Year. He has earned hefty dollars from production royalties, shares of Aftermath Entertainment.

American rapper, singer, songwriter, P. Diddy worked as a talent director at Uptown Records at the starting of his career. He founded his own record label in 1993 titled Bad Boy Entertainment. He has won two MTV Video Music Awards and three Grammy Awards. He has also produced and cultivated artists such as The Notorious B.I.G and Mary J. Blige.

American rapper, songwriter, record executive, Jay-Z is one of the world’s best-selling music artists, with over 75 million singles and 50 million albums sold worldwide. He has 22 Grammy Awards under his name. He was honoured into the Songwriters Hall of Fame and a first rapper to do so in the year 2017. He is a wealthiest American musician and a businessman.

American rapper, singer, songwriter, Kanye West is among the world’s best-selling music artists with over 140 million records sold worldwide. His discography also includes the full-length collaborations Kids See Ghosts (2018), Watch the Throne (2011) and with Kid Cudi and Jay-Z respectively. He has 21 Grammy Awards under his name.

Wrapping Up The Top 20 Richest Rappers in the World:

Messenger is now safe than before; company has added new app lock feature