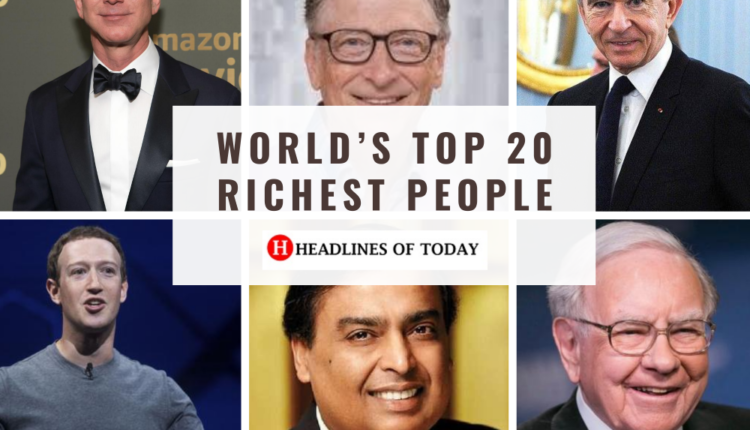 Richest people in the world are becoming richer in this coronavirus pandemic. Their company wealth is increasing and therefore their net worth. Jeff Bezos, Elon Musk and Mark Zuckerberg have made USD 115 billion in just six months of 2020 amid lockdown. Well, the coronavirus pandemic has driven activity online faster which had led to a surge in the wealth of Amazon, Telsa and Facebook.

Note: The data and rankings of the World’s Top 20 Richest People are based on the Forbes list of July 31, 2020.

American internet entrepreneur, Jeff Bezos is the world’s richest person since 2017 after his net worth increased to USD 150 billion in July 2018. His multi-national technology company Amazon in history became the second company to reach a market cap of USD 1 trillion.

During the COVID-19 pandemic, it was reported that Bezos’s wealth had grown by USD 24 billion, citing a surge in demand on lockdown from households shopping on Amazon.

An American business magnate, Bill Gates holds the title of Forbes’s richest person in the world from 1995 to 2017. he was surpassed by Amazon founder Jeff Bezos in October 2017 who had an estimated net worth of USD 90.6 billion compared to Gates’s net worth of USD 89.9 billion at the time.

The co-founder of Microsoft Corporation has is one of the best-known entrepreneurs and has supported numerous startups around the world.

What’s the Bill Gates worst fear? Watch the video below! 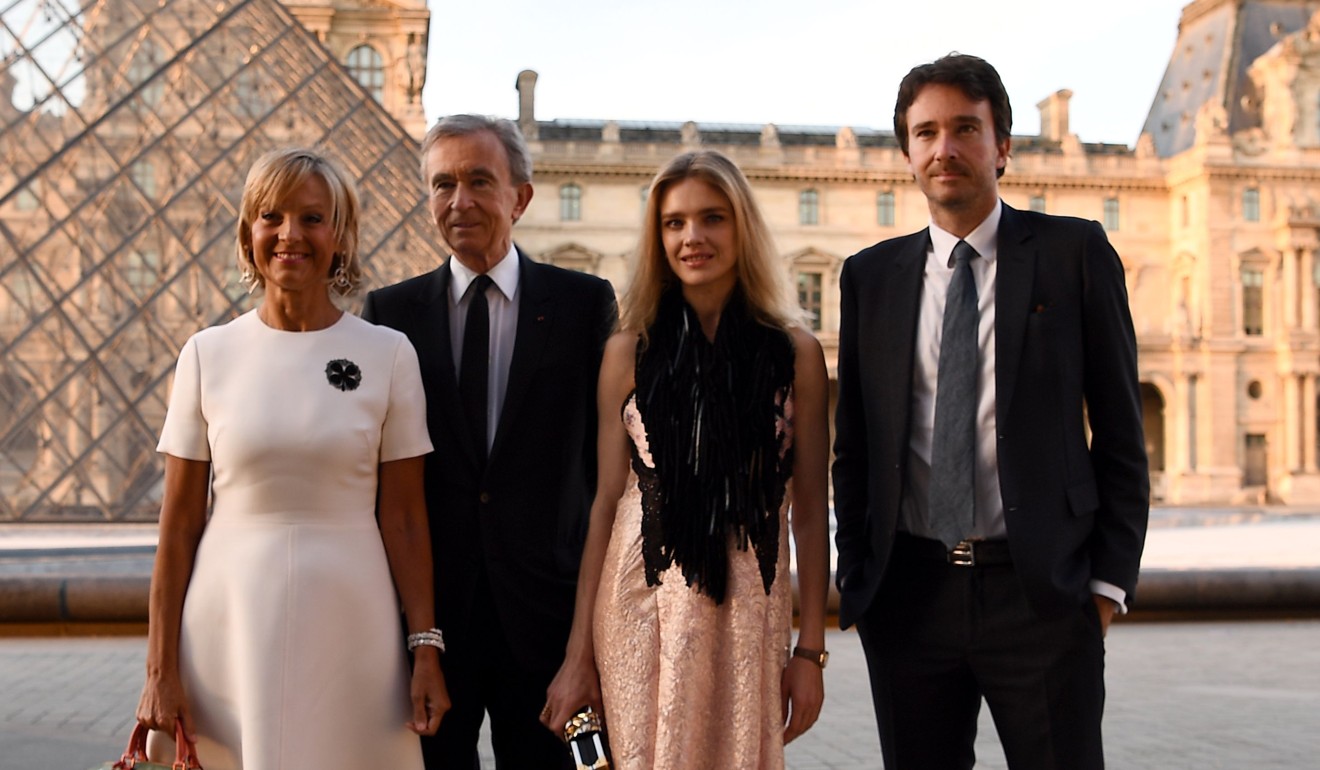 An American media magnate, Mark Zuckerberg became the world’s youngest self-made billionaire at the age of 23. Chief executive officer, chairman and controlling shareholder of Facebook, Inc is also the co-founder of the Breakthrough Stars, solar sail spacecraft development project. His name was written among the 100 wealthiest and most influential people by Time magazine since 2010.

Indian billionaire business magnate, Mukesh Ambani is currently the richest man in Asia. He is the Chairman, MD and the largest shareholder of Reliance Industries. Being the Fortune Global 500 Company, Reliance Industries is India’s most valuable company by market valuation. Due to high profile collaborations, he is now 5th richest person in the world. 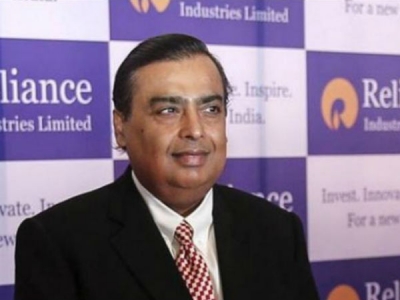 An American investor, business tycoon, Warren Buffett is considered one of the most successful investors. Global media outlets refer him as the “Sage” or “Oracle” of Omaha. He was ranked as the richest person in the world by Forbes in 2008 with a net worth of USD 62 billion.

An American business magnate, Larry Ellison was listed by Forbes magazine on October 2019 as the fourth-wealthiest person in the United States and as the sixth-wealthiest in the world, with a wealth of USD 69.1 billion, increased from USD 54.5 billion in 2018. He is the executive chairman and CTO, chief technology officer of Oracle Corporation.

Engineer, industrial designer, Elon Musk is the CEO of Telsa, CTO of SpaceX, founder of The Boring Company, co-founder of OpenAI, Chairman of SolarCity and co-founder of Neuralink. Musk has said the goals of Tesla, SpaceX, and SolarCity is the vision to “change the world and help humanity”. He is now the eighth richest person in the world.

An American businessman and investor, Steve Ballmer is the current owner of the National Basketball Association (NBA), Los Angeles Clippers. According to Forbes As of 31st July 2020, his personal wealth is estimated at USD 70 billion, ranking him the 9th richest person in the world.

An American computer scientist, Larry Page is popularly known as the co-founders of Google along with Sergey Brin. He is now an Alphabet board member and a controlling shareholder. He was placed in the 10th position by Forbes in the list “Billionaires 2019. Co-inventor and namesake of PageRank, he is now a 10th-richest person in the world according to July 31, 2020 data.

An American computer scientist, Sergey Brin co-founded Google with Larry Page. He is the co-founders, board members, controlling shareholders, and employees at Alphabet. With an estimated net worth of USD 66.7 billion, he is currently holding 11th position in Forbes Billionaires List.

A French billionaire heiress, Françoise Bettencourt Meyers works on Jewish-Christian relations. Her family owns the company L’Oréal. She is the richest woman in the world as of October 2019, with an estimated fortune of USD 59.3 billion, as per Bloomberg. 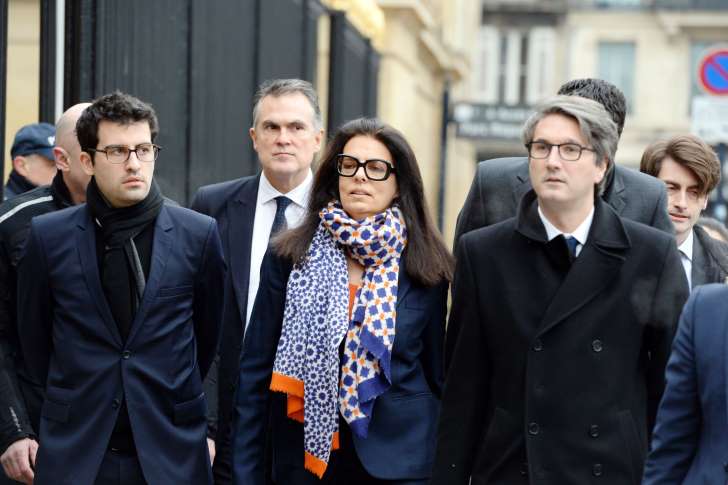 A Spanish billionaire businessman, Amancio Ortega is the second-wealthiest person in Europe as of December 2019 after Bernard Arnault. He is the former chairman and founder of Inditex fashion group. Ortega is the second wealthiest retailer in the world for its chain of Zara clothing all over world and accessories shops.

An American heiress, Alice Walton wealth comes from Walmart Inc. She was ranked as the 9th-richest person in the world as of May 2020 and the richest woman in the world, with a fortune of USD 56 billion. She is the only daughter of Helen Walton and Walmart founder Sam Walton.

An American heir, Jim Walton is the youngest son of Walmart founder Sam Walton. He is the chairman of Arvest Bank and Community Publishers. Walton was reported, in September 2016, to own over 152 million shares of Walmart worth over USD 11 billion. 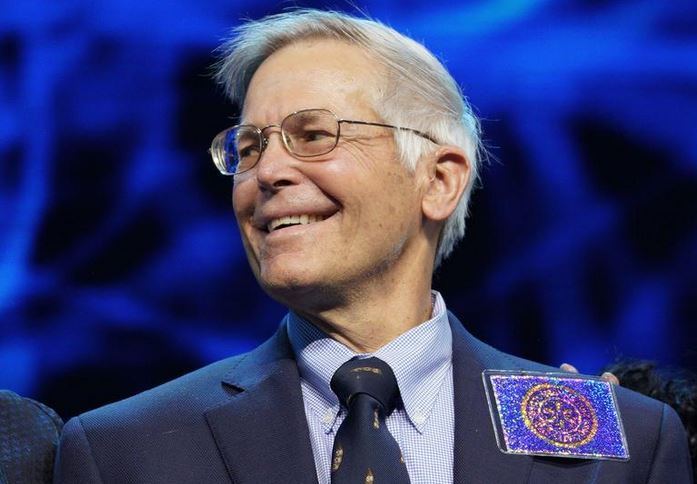 An American heir, Rob Walton is the eldest son of Walmart founder Sam Walton. He was the chairman of Walmart upon his father’s death in 1992 but was replaced by his son-in-law, Greg Penner in June 2015. 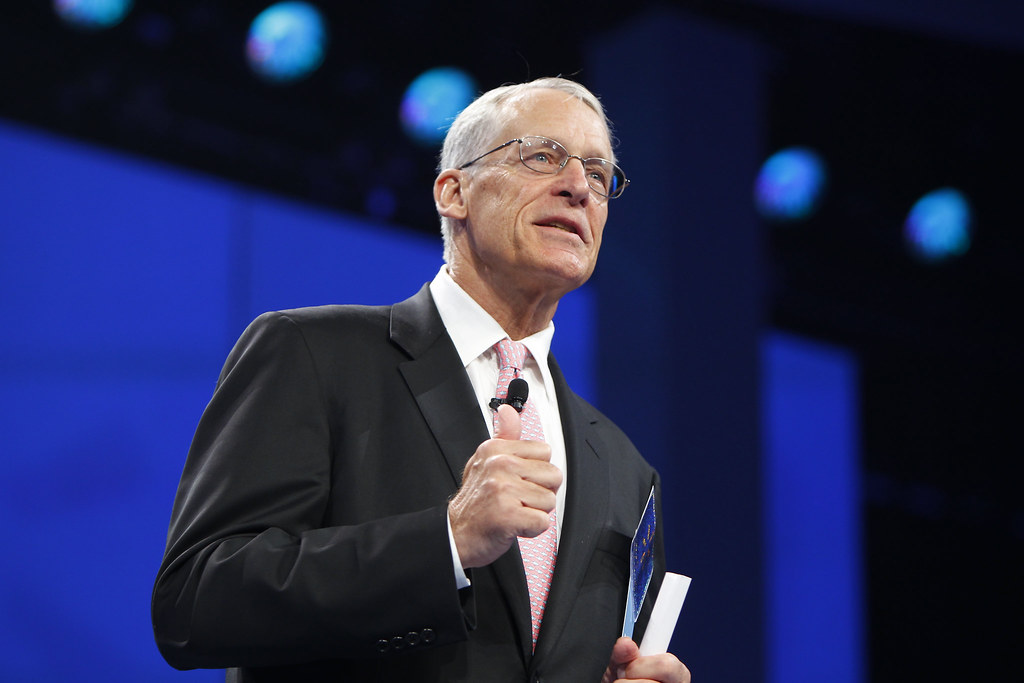 Chinese business magnate, Ma Huateng, also known as Pony Ma, chief executive officer of Tencent. Asia’s most valuable company, Tencent is one of the largest Internet and technology companies. CEOWORLD magazine named him the “Most Powerful People in the World” in 2018. He is often described as an “aggressive acquisitor”. 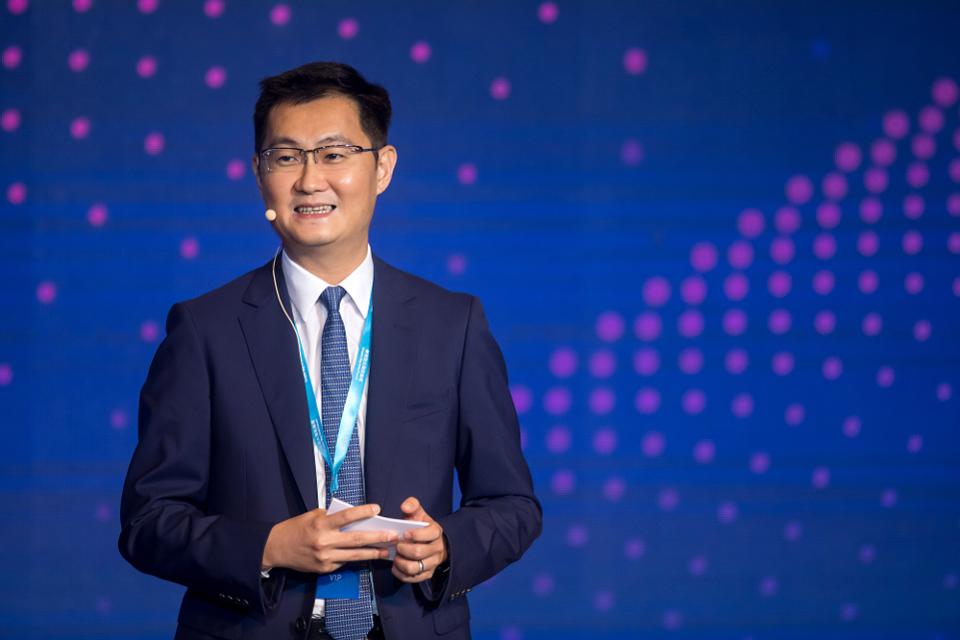 An American novelist, MacKenzie Scott holds 25% of ex-husband Jeff Bezos Amazon’s stake which is 4% of the company. She is the 22nd richest person in the world revealed by Forbes magazine largely due to her USD 38 billion divorce settlement. Her divorce gave her the title of third-wealthiest woman in the world.

An American businessman, Michael Bloomberg is the co-founder of Bloomberg L.P. Also a politician, he was a candidate in the Democratic presidential primaries 2020. He is considered to have had a far-reaching influence on the business sector, politics, and culture of New York City during his 3 terms as mayor. He established public charter schools, rebuilt urban infrastructure, public health initiatives, and supported gun control as a mayor.

A Mexican business magnate, Carlos Slim Helú derived his fortune from a considerable number of Mexican companies. He is the CEO of América Móvil, Telmex, and Grupo Carso. He is the largest single shareholder as of 2016, of The New York Times Company. His net worth is equivalent to about 6% of Mexico’s GDP, gross domestic product. 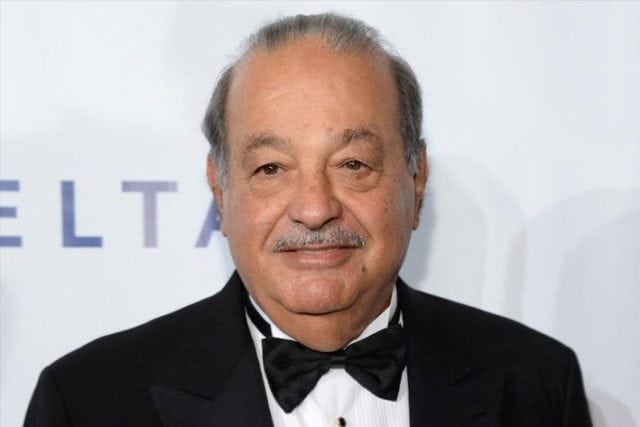 Together, let’s look at the latest data and rankings of the World’s Top 20 Richest Person, based on the Forbes list of July 31, 2020.

Analysis of Richest people in the World

The fastest growing platform Amazon has a net worth of USD 63 billion this year. And on July 29, the technology giant leaps to an unprecedented USD 13 billion. This has undoubtedly contributed to Jeff Bezos fortune which is said to exceed USD 200 million in coming months. Its stock has skyrocketed 70% since the start of the year.

Bezos’ personal wealth and fortune are more than the valuation of several giants like Nike Inc, McDonald’s Corp, and Exxon Mobil Corp.

Mark Zuckerberg of Facebook Inc holding 4th position on this date is now growing in fastest pace. The platform has become the go-to communications tool during the lockdown period. According to sources, chief executive officer of Facebook has grown USD 9.1 billion richer this year.

Mark Zuckerberg has added USD 15 million to his wealth even though the company Facebook has had to face several brands boycotting ads on his social media platform.

Elon Musk is a big winner in 2020 whose net worth has more than doubled to USD 70.6 billion on the back of surging Tesla Inc shares with a market cap of USD 304.5 billion. Well, it’s worth more than Ferrari, Ford, General Motors and BMW combined.

CEO of SpaceX, Elon Musk was positioned at 31 on Forbes’ Billionaires List on mid-March, with a net worth just under USD 25 billion. It’s amazing to witness that his wealth has nearly tripled since then. He holds 21% of Telsa. Musk’s rocket company, SpaceX, is now valued at nearly USD 36 billion.

The world’s five richest people are dominated by Americans or European for years. Guess, 2020 has made a change in plan; Mukesh Ambani is standing at the 4th position among the richest people in the world with a fortune of USD 77.4 billion. The rise has been remarkable.

The collective wealth of tech billionaires (has nearly doubled since 2016) of the world’s 500 richest people from USD 751 billion to USD 1.4 trillion. The technology sector is the fastest-growing sector as the advancements in technology is gaining importance.

From among the world’s 10 richest people, seven of them derive the bulk of their fortune from technology holdings, with a combined net worth of USD 666 billion, up USD 147 billion this year itself.

Currently, five of the largest American tech companies — Apple, Alphabet, Amazon, Facebook, and Microsoft — have market valuations equivalent to about 30% of U.S. GDP, gross domestic product. That’s almost double what they were at the end of 2018.

The increase of digital technologies will dominate in the upcoming days. The technology firms and the promoters of online retail companies have benefited from the pandemic