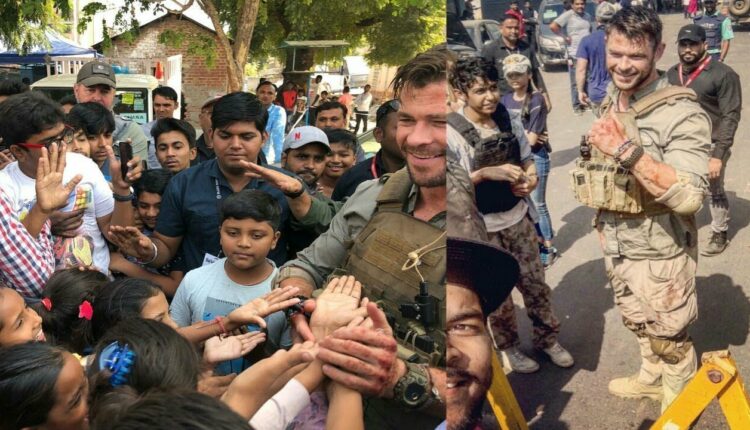 Chris Hemsworth is an Australian actor. Everyone is aware of the name Chris Hemsworth. People know him by the name of Thor. Chris Hemsworth is in India for shooting. He is enjoying in India and having a beautiful time in India. Moreover, he sent Diwali wishes to his fans. This is the most amazing thing which a fan could expect.

He is famous for playing the role of Thor in Avengers. But he is not in India for shooting Avengers. Netflix is taking out one thriller named as Dhaka. So for shooting this thriller, Thor is in India. He is going to shoot with Manoj Bajpayee and Randeep Hooda. Besides shooting he is spending quality time in India. He is excited and more amazed by seeing the fan following of him in India. Everyone has gone mad when everyone came to know that Thor is in town.

Updates of “Thor” Chris Hemsworth regarding India on social media

He posted many pictures regarding his visit to India. He shared a video through Instagram by wishing everyone Happy Deepavali and by saying Namaste to everyone. To make the wish more special, Thor was seen wearing a blue kurta along with a red Tika which was there on his forehead. This gave him the traditional Indian look. Sam Hargrave along with Randeep Hooda also joined Chris Hemsworth for the video. Moreover, on the official Instagram account, Thor is sharing the moment of the trips with his fans. On the very recent occasion, he was seen to share picture where he was spending his time with his fans.

Chris Hemsworth enjoyed the traffic jam which he found in the city of Ahmedabad.  Not only had this but Thor also given the caption for this as the “beautiful chaos”. He also added that it is a good system where everyone is intersecting and no one is in a movement except the cars are not on the right side of the road.

So everyone is now waiting for the Netflix series Dhaka. One of the main reasons is Chris Hemsworth shooting the series in India with Bollywood actors. Let’s hope for the best that the shooting for the series goes well and Thor has a good impression of India. So the wishes made by Thor made his fans filled with joy and amazement.

Keto vs Atkins Diet: which one to choose?

A Complete Overview of Gaming Localization