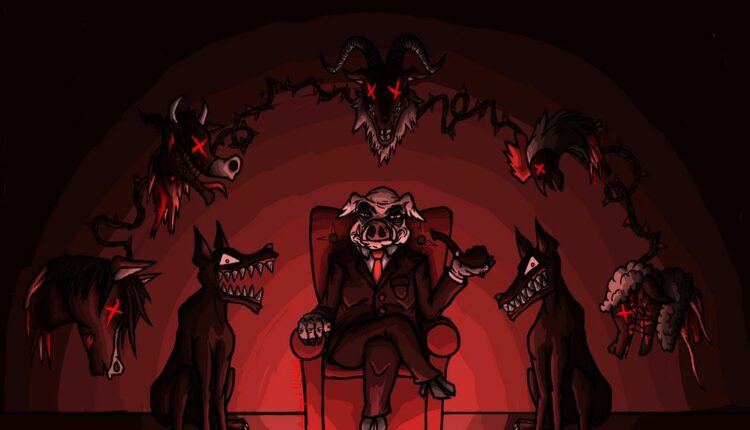 If you’re in a mood for reading a short classical book so welcome to my blog. Today I’ll be speaking about the “Animal Farm” , the evergreen classic by George Orwell. But before we dive into the contents of the book let us first get familiar with it’s author.

George Orwell was born on 25th June 1903 was an English novelist, essayist, journalist and critic. His works severely criticized some rudimentary social norms and totalitarianism, and immensely supported democratic socialism. The books which he wrote extensively covered all the above issues.

It is a Dystopian Reality novel which showcases the harsh and brutal reality of our society in a more twisted and dark manner. The story begins on a countryside farm in England called the Manor Farm owned by Mr Jones. Where one fine night the Old Major (a senior pig) held an urgent meeting for all the farm animals. In the meeting, Old Major speaks about the dream he had the previous night.

Although now that Old Major was dead, his speech was very much alive in the minds of all the other animals. Especially in the minds of two young boars named Napoleon and Snowball. Who compelled the rest of the animals to put up a fight against Mr. Jones, and end his cruelty. And the same happens: Animals win the battle. And Mr. Jones is forced to leave the Manor Farm. Soon the animals rename the farm as Animal Farm. The animals on the Animal Farm soon start living their dream life. Although without any human help, it was challenging for animals to carry out all the farm work, they manage it anyway. The result being by the year-end there was surplus produce of food like never before on the farm. Each animal on the farm gets surplus food and clean water.

But soon the happy times come to an end when Napoleon, through his corrupt and wicked means, kicks snowball out of the Animal Farm and declares him a traitor. After that, we get to see how cruel Napoleon exploits all the Animals on the farm, takes advantage of them, terrorize them and continuously keeps on manipulating them. Here is a scene from the book which pretty much sums up the tragic fate of animals on the Animal Farm, and the evil nature of Napoleon.

(Rating)This book is an eye-opener and is suitable for everyone. Hence I am rating this book 5/5. It is a concise and crisp (the book is only 100 pages long to be precise). The writing style George Orwell is outstanding; it’s simple and to the point, which makes it a perfect book for beginners or those who want to improve their English.

Now, speaking of the storyline, although the book was written way back in 1945. But one can very well relate to it even today. I think the reason being corruption, and manipulative politicians/leaders continue to exists even today. The book is a mirror of our society today, which is what makes it so damn impressive, and relatable. This book compelled me to think a lot about dirty politics which goes on in today’s time. And to be honest, it made me feel very sad and angry both at the same time. I would recommend all of you read it once, as it will compel you’ll to think. I couldn’t find one flaw in this book and didn’t feel bored at any point of time while reading it. It is a page-turner for sure, and one can quickly finish reading it in one sitting.

My only regret is that I didn’t read this book earlier. But as the saying goes “Late Is Better, than never” the same thing applies for me as well.

Quote from the book:

The book consists of plenty of deep meaning lines and quotes. Here is one such famous excerpt from the book.