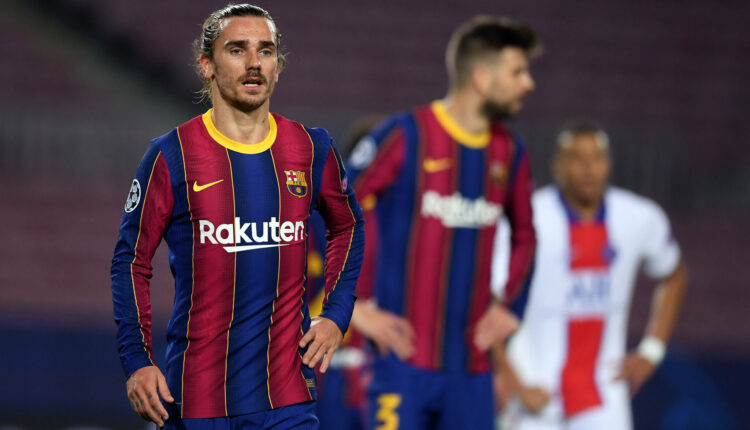 An explicit feud rose among Barcelona’s players during their match against PSG, with pitch-side television microphones in the unfilled Camp Nou plainly getting a contention among Griezmann and Pique.

Barca’s defense included Ter Stegen in goal alongside Gerrard Pique, Jordi Alba, Clement Lenglet, and Sergino Dest at the back. Despite the absence of Neymar and Di Maria, PSG and Kylian Mbappe who absolutely terrorized Barca’s defense with a hat-trick made those 90 minutes proper torture for them.

‘Not one f***ing long spell of possession, for f*** sake. F***ing hell! Come on,’ yelled Pique after the corner had been awarded.

The quarrel continued as Pique then added ‘No, f*** you, we are suffering and we have been like this for five minutes. Mother******, we are running like crazy.’ To which Griezmann replied ‘I’m running too’.

Ter Stegen and Clement Lenglet tried to act as peacemakers between the pair, but could not stop the argument.

Pique was angry at the strikers for not making enough effort towards the defense. But unfortunately, things only got worse for him as in the second half Barcelona conceded 3 more goals.

The Frenchman left as soon as the game ended and headed to El Prat airport stat while ‘leaving his team-mates at the Nou Camp’ dwelling on their heavy defeat. The Barca coach Ronald Koeman has given the squad two days of vacation to rest for their next match against Cádiz and the former Atlético striker has decided to take advantage of the situation and spend them outside Barcelona.

Griezmann’s trip has caused some controversy given residents in Spain are only allowed to make essential journeys and must abide by a 10 pm to 6 am curfew as a safety measure against COVID-19. He is believed to have taken a private place to visit his family in Lyon and be back in time for their routinely training on Sunday.

Griezmann might be in a situation where he is being used as a scapegoat in the match, but in reality, the loss to PSG was a result of a poor interplay between the Barcelona players and the whole team is to be blamed for the defeat.