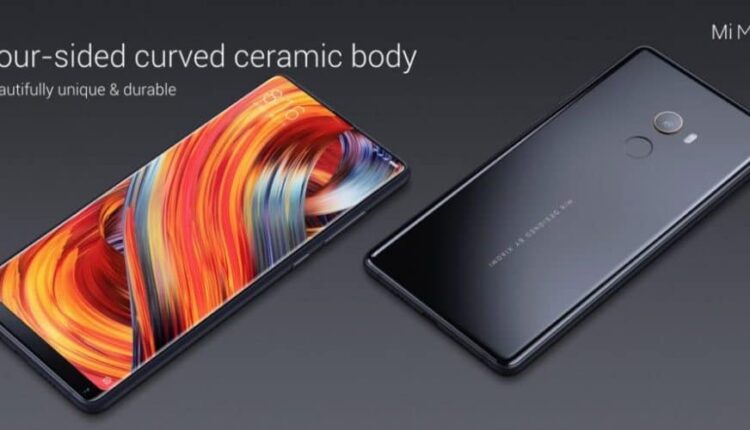 XIaomi Mi MIX 2 is smaller and narrower as compared to its last year predecessor MI MIX. THe body dimensions of the MI MIX 2 are 151.8 x 75.5 x 7.7 mm while the last year Mi MIX dimensions are 158.8 x 81.9 x 7.9 mm. The Mi MIX 2 is made by ceramic back material and comes with curved edges from all four sides. On the front side, there is less bezel at the bottom and there is an earpiece above the screen.

Xiaomi Mi MIX comes with 5.99-inch IPS display with 2160 x 1080 pixels of resolution and 403 PPI density ration. It supports 80.1% screen-to-body ratio and 18:9 aspect ratio. The Mi MIX is powered by a Dual Quad-core CPU under the hood along with latest Qualcomm Snapdragon 835 chipset on board. It has Adreno 540 GPU for better graphics performance, the company announced the four different memory variants.

XIaomi Mi MIX 2 is available on the market in 64 GB, 128 GB and 256 GB internal storage options. All three models have 6 GB of RAM onboard, there is one more special model of the Xiaomi Mi MIX 2, comes with 8 GB of RAM and 128 GB internal storage option. There is no micro SD card support in any of them. It runs on Android 7.1 Nougat operating system with MIUI 9 running on top. We can expect that the company will release the Android 8.0 Oreo update for the phone.

The MI MIX 2 is featured with a single 12-megapixel Sony IMX386 camera on the back side which is lit bit bumped. The rear camera of the phone comes with f/2.0 aperture and 4-axis optical image stabilization, 1/2.9″ sensor size, 1.25 µm pixel size, phase detection autofocus and LED Flash. It has a 5-megapixel camera on the front side for selfies and video calls. It comes with a fingerprint sensor below the camera.

The Mi MIX 2 is packed with Non-removable Li-Ion 3400 mAh battery inside the body and supports Quick Charge 3.0 feature. It comes with Bluetooth 5.0, 3.5mm audio jack port, Type-C 1.0 reversible connector, Wi-Fi and NFC. It supports 43 bands including 22 LTE bands and one WCDMA band.