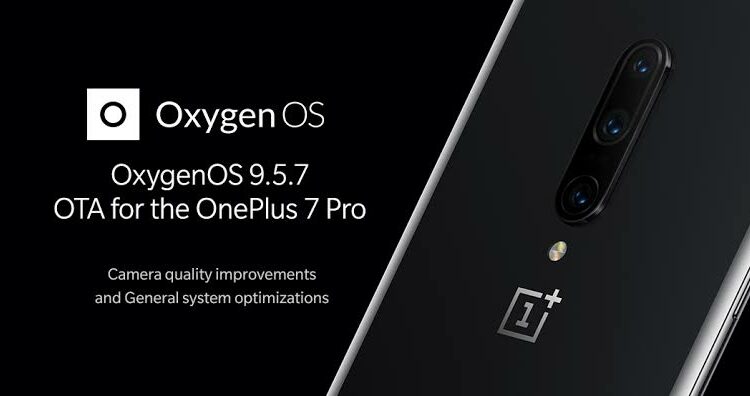 OnePlus community is bringing new updates to OnePlus 7 Pro, gets Oxygen OS 9.5.7 Update and improves camera quality. The OnePlus community just launched their new device, OnePlus 7 pro a few days back. The company continued its tradition of selling more affordable devices. Many reviews hailed it one of the best devices ever of one plus community, but ambitious products often fail to match the consumer’s requirements.

The company made some massive headlines regarding the features and specifications of this device. But as per the headlines, the device does not match the criteria of its users at some point. Users complain about various factors like regarding camera improvement, system update and many other aspects.

This update will be received by some limited users, but afterwards having a broader look at its functioning, it will be rolled out to all its users. Users can manually check OXYGEN OS update on your devices by going through SETTINGS>SYSTEM UPDATE. The update is of 12MP in size.

So here we bring it to you the updates of OnePlus 7 pro:

OnePlus updated version focuses on two main aspects. The first change is for the camera. The OnePlus 7 Pro takes good images but it sometimes struggles in some situations. Improved the white balance consistency of the triple rear camera setup and improved the accur acy and stability of autofocusing. While taking litter shots from the camera, it produces a greenish tone, that is improved in its latest update. The issues regarding noise in HDR is also fixed. Many aspects regarding the camera have been improved and they will present you a better camera than before. The update also has improved brightness and clarity in the extremely low light scene in nightscape.

The second change that brings to OnePlus 7 Pro device is: optimises double tap to wake, fixes issues with the ambient display, improves audio quality for voice calls from the roamhird-party app, improves touch sensitivity on the screen. The update also informs that it brings changes to the phantom touch of Ghost touch issues where the touchscreen was informed to randomly process non-existent taps.

Changes that are made after the update of OxygenOS 9.5.7 in camera section are:

Changes that are made after the update of OxygenOS 9.7.5 in system settings are:

Essential Oils For The Skin Problems