Nokia X: Launch is expected on 27th of April 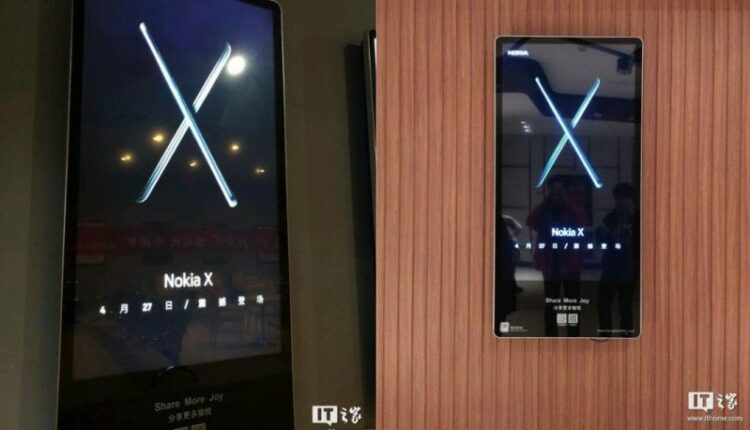 Nokia X: Launch is expected on 27th of April, The announcement of four new smartphones was made in the Mobile World Congress 2018 which took place at Barcelona, HMD Global. It is a home for the Nokia mobiles and they are looking for the launch of a new smartphone mid-range. Based on the advertisement the upcoming model of HMD Global is the Nokia X.

The advertisement for the smartphone that is Nokia X was found inside a movie theatre located at China, providing their authenticities. Two Nokia smartphones are visible in the posters which are having X shaped. As per the advertisement, the Nokia X will be making its way in the Chinese market on 27th of April. If we are able to recall then we can find that Nokia X was released in February 2014. This was an entry-level smartphone and it was running on Nokia X platform 1.0.

According to the reports it can be said that this will be a mid-range phone offering by HMD Global and not a flagship one. The main intention of HMD Global is may be to release the Nokia X in the market with a new look and with upgraded specifications just like they did for the Nokia 3310.

Nokia is trying to take the market of all the phones by its quality services. Everyone goes for a brand and so here Nokia takes their phone a step forward. They are very much liable enough to use. They provide their customer with a good camera, processors and a good battery life which are the essential feature which a normal person looks for. When it comes to the look then mention must be made of the phones released this year by Nokia at Barcelona. Nokia 6, Nokia 7 Plus and Nokia 8 Sirocco are the three new phones which have been launched in Barcelona 2018.

If the question is with the rely on Nokia phones, then whatever the price may be people will rely on Nokia and go for a branded one than that of the local ones. Recently Nokia launched three new phones Nokia 6, Nokia 7 Plus and Nokia 8 Sirocco. All the phones are having a different range of prizes with different specifications. But the common thing in all the phones is that they are providing their customers with the latest Android Oreo and Zeiss lens. They are also giving fast charging capability.