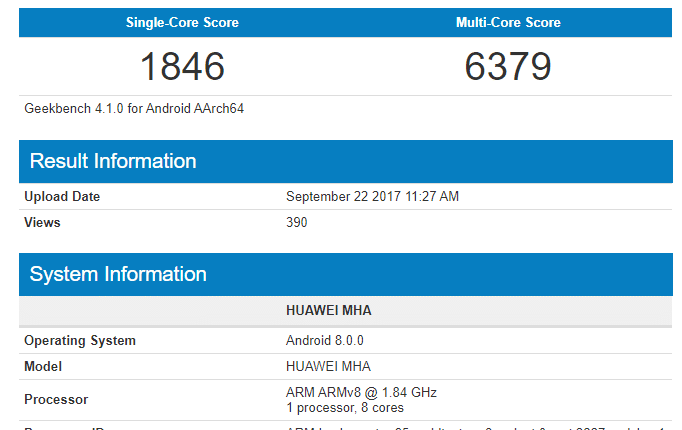 The Huawei Mate 9 was launched with MHA codename which means Manhattan. The Mate 9 is powered by Octa-core CPU and Hisilicon Kirin 960 chipset under the hood. It has 4 GB of RAM and 64 GB internal storage option along with micro SD card support. It comes with 5.9-inch IPS display with 1080 x 1920 pixels of resolution. It is packed with Non-removable Li-Po 4000 mAh battery along with fast charging feature on board. There is a fingerprint sensor on the back side of the phone.

The phone also mentioned in the April month that the Huawei was testing an Android 8.0 Oreo build for the Mate 9. An image of the Huawei Mate 9 Chinese model was published online that claimed the phone is running on latest Android OS.

Now, Huawei Mate 9 appeared on Geekbench, we can expect that the Android 8.0 Oreo update for the Huawei Mate 9 should not be far off. According to the Geeekbench, the benchmark scores don’t bring key changes in performance. However, User of the Mate 9 will get the Android O new features as notification dots, picture-in-picture mode, and autofill.

Huawei is currently working on its new flagship smartphone, called Huawei Mate 10. The company is holding an event on October 16 and expected to launch the new Mate 10 flagship device in the event. The Mate 10 will run on Android 8.0 Oreo out of the box.