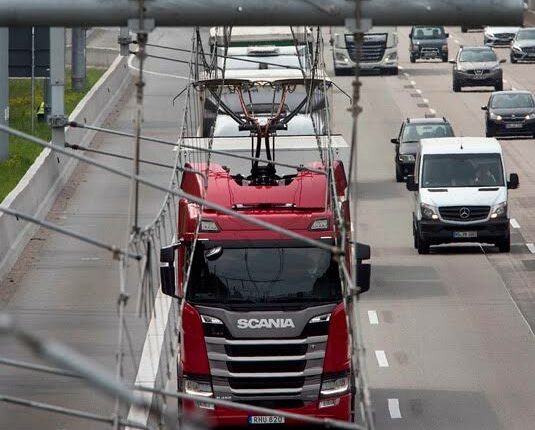 Opened for A5 autobahn, the electric highway system uses Siemens e Highway technology designed for hybrid trucks equipped with equipment mounted on their roofs which allow them to intake electric lines from overhead cables.

Electric mobility is the future, and there no denying fact. While many countries have moved ahead and many countries are stepping towards it at a phenomenal Speed.

Germany has recently stepped up and released its first electric highway for Trucks. The trucks will be running by the cable connection fitted on their roof and will get connected to trucks for further functioning. Opened on a 10 km stretch of the autobahn, the electric highway system uses Siemens e Highway technology that has been designed for hybrid trucks to work on this track. This is the first of its kind of test that has undertaken in Germany and has been operational in Hesse, between Weiterstadt and Langen/Morfelden, and by mid 2020, the authorities are planning to lay five such tracks in that area.

The trucks are equipped with a hybrid system that uses a powerful motor, a diesel engine and batteries that can be charged from overheated power lines. The trucks can run up to a speed of 90kmph and simultaneously charges its batteries when trucks get disconnected by the power lines, it keeps on moving with the help of energy stored in their batteries. And when the batteries get discharged then they come on the file mode and run on diesel. Siemens said that the highway system is twice as efficient as conventional internal combustion engines and help reduces air pollution and resources.

Different authorities have appreciated this plan and are working to implement it fully.

Parliamentary State Secretary at the Federal Ministry for the environment, nature conservation and nuclear safety said that- “ Electrified overhead line trucks are a particularly efficient solution on the way to climate neutral transport. We’ve tested the system for many years on private test routes. We are now inaugurating practical test on A5 autobahn between Frankfurt and Darmstadt and the further two tracks will be tested and will follow the path of Schleswig-Holstein and Baden-Wurttemberg”.

The German government has projected it at the cost of 70 million euro for the construction and development of OH truck system.

Siemens has initiated similar projects of the highways technology on a small scale in Sweden and near the US ports of Los Angeles and Long Beach.