Alcatel introduced three budget range and affordable smartphones at MWC 2018 event along with Alcatel 1X, they are Alcatel 3, Alcatel 3V and Alcatel 3X. Each of them has its own strengths and two of them have dual camera lens setup on the back side. All three variants have a fingerprint scanner on the rear panel and also come with Alcatel’s face Key feature. you can use this feature to unlock your phone with a glance in half a second.

Alcatel 3 comes with 5.5-inch 720 x 1440 pixels of resolution display with 18:9 aspect ratio. It is powered by 1.3GHz Quad-core Cortex-A53 Mediatek MT6739 processor under the hood along with PowerVR GE8100 GPU. It has 2 GB of RAM and 16 GB internal storage option along with micro SD card slot on board. It has a 13-megapixel camera on the back side with f/2.0 aperture, phase detection autofocus and LED flash. On the front side, it comes with the 5-megapixel camera for taking selfies along with LED flash.

The Alcatel 3 is the least powerful smartphone of the series. It is packed with Non-removable Li-Ion 3000 mAh capacity battery inside and it runs on Android 8.0 Oreo out of the box. The phone also has Cat. 4 LTE connectivity, micro USB port, Bluetooth 4.2, dual SIM, Wi-Fi and more features.

The company released the Alcatel 3 in Spectrum Black, Spectrum Blue, and Spectrum Gold color options with a 2.5D glass and radial design on the back. But what color model you get, it will depend on region. The phone goes on sale in next month and the price is  €149.99.

Alcatel 3X features a larger 5.7-inch display with 1440 x 720pixels of resolution with 18:9 aspect ratio. It has the same processor under the hood as the Alcatel 3, 1.3GHz Quad-core Cortex-A53 Mediatek MT6739. It has two memory variants, one 2 GB of RAM with 16 GB internal storage and another with 3 GB of RAM and 32 GB internal storage. Both model support micro SD card up to 128 GB. It runs on Android 7.1 Nougat operating system out of the box.

The Alcatel 3X is featured with the dual camera lens on the back side with dual LED flash, 13-megapixel primary camera with f/2.0 aperture and EIS and 5-megapixel camera with f/2.2 aperture and 120° wide-angle lens. It has a same 5-megapixel camera on the front side with LED flash for selfies. The phone is packed with Non-removable Li-Ion 3000 mAh capacity battery under the hood. The fingerprint scanner placed on the below the rear camera.

Alcatel’s 3X smartphone will be available in Metallic Black, Metallic Blue, Metallic Gold, Spectrum Blue, and Spectrum Black color options. It will go on sale in next month €179.99.

Alcatel 3V comes with 6-inch IPS display with 2160 x 1080pixels of resolution and 18:9 aspect ratio. It also has 2.5D glass on the panel and support around 402 PPI density ratio. It is 8.1mm thick and weighs 155 grams. The phone is powered by Quad-core CPU under the hood which clocks at 1.4 GHz Cortex-A53 along with MediaTek MT8735A chipset on board. It has only 2 GB of RAM and 16 GB and 32 GB internal storage option. 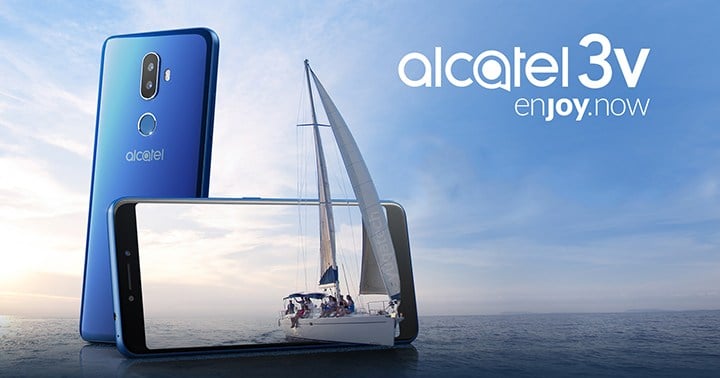 The phone is featured with dual cameras lens on the back side, 12-megapixel regular camera with f/2.2 aperture, 1.25µm pixels and 1/2.8 pixel sensor and 2-megapixel secondary camera with a f/2.4 aperture for real-time bokeh effects. The rear camera of the phone also has phase detection autofocus, LED flash, Geo-tagging, touch focus, face detection, HDR, panorama and Electronic Image Stabilization (EIS) features. On the front side, it has a 5-megapixel camera with LED flash for selfies.

Alcatel’s 3V smartphone is packed with Non-removable Li-Ion 3000 mAh battery capacity battery inside the body. It has a fingerprint scanner on the back side. It runs on Android Oreo operating system out of the box.  It also comes with NFC connectivity, Micro USB port, micro SD card slot, dual band Wi-Fi, dual SIM etc connectivity features.

The phone will be available in spectrum Black, Spectrum Blue, Spectrum Gold color options and it will go on sale next month at the €189.99 price tag.