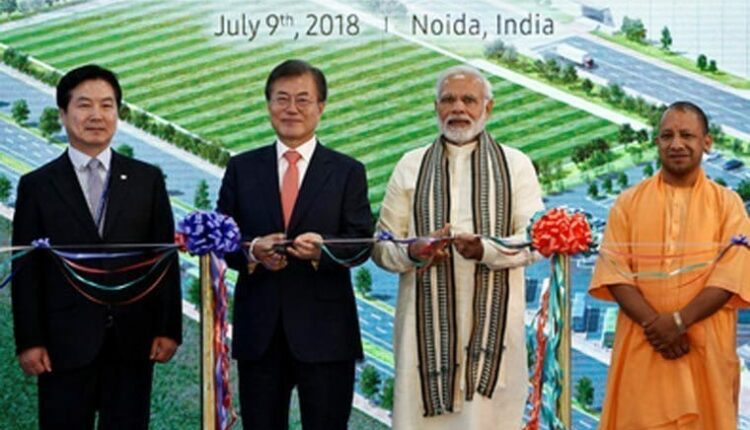 Samsung’s mobile phone manufacturing unit has been built at a cost of Rs. 5000 crore and will help the company raise its manufacturing capacity from 68 million units to 120 million units. For India, this factory is slated to provide more jobs to the youth while making the country a global export hub.

#WATCH Delhi: South Korean President Moon Jae-in and PM Narendra Modi in the Metro while on their way to the Samsung plant in Noida pic.twitter.com/8FSTOK5jyg

Prime Minister Modi and President Moon took a Delhi metro to reach this factory situated in sector 81 of Noida. UP chief minister Yogi Adityanath also attended the ceremony along with senior officials of Samsung. According to PM Modi, 30 percent of the sets manufactured at this factory will be exported to other markets.

While our Prime Minister took pride in his “Make in India” initiative that has brought the number of mobile phone factories in the country to 120, President Moon marveled in the knowledge that Korean products are popular in India. He said, “Whenever I talk to business community representatives I always mention one thing – that I don’t think there is a middle-class home in India where a Korean product is not found.”

President Moon had arrived in India on Sunday Evening. Since then, he has been to Gandhi Smriti to pay his tribute to the father of the nation and Samsung factory inauguration which was followed by an official lunch at the Hyderabad House. Here they have plans to address the India South Korea CEO’s roundtable.

The lunch was followed by a meeting with Indian President Mr. Ramnath Kovind in the evening, where the Indian counterpart will host a banquet for the visiting President and his delegation at his residence; Rashtrapati Bhavan. President Moon was slated to be accorded with a ceremonial reception at Rashtrapati Bhavan on Tuesday where a number of agreements are likely to be signed.