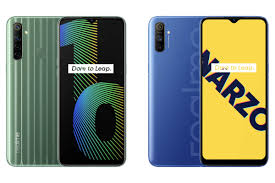 Realme launched Narzo 10A Smartphone with 4 GB RAM and 64GB storage variant launched in India. The price of the phone is RS.9999. The company is offering the phone in two colours- Blue and White. It can be purchased from Flipkart and realme.com from Tuesday (June 23) 12 noon. The new variant will be available in selective offline stores of some states like Maharashtra, Tamil Nadu, Rajasthan, Gujarat, Karnataka, Kerala, and Bihar. In May, the company launched its single variant of 3GB RAM and 32GB storage whose price was Rs. 8,999. The phone was launched in May after many initial delays due to the coronavirus lockdown.