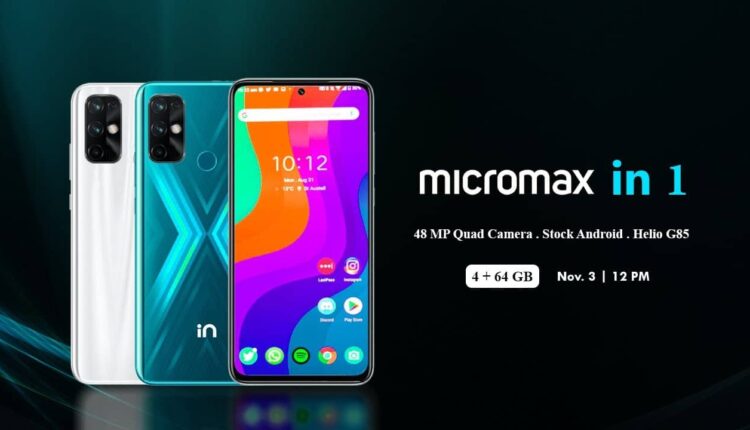 Unless you’ve been living under a rock, it is now common knowledge that Micromax is making a comeback to the Indian mobile phone market. The Indian company, although extremely popular at its peak, lost its place to Chinese companies such as Oppo and Mi. However, with China’s current tensions, Micromax seems to have found the perfect time to return to the scene.

Micromax announced its plans to come back through a video a while back. Since then, speculations about the upcoming phones have been running wild. Rahul Sharma, Micromax’s co-founder, has confirmed that the company will introduce two phones named Micromax In 1 and Micromax In 1A.

The two brand new phones are scheduled for launch on Tuesday, November 3, at noon. At the moment, we do not know the pricing details of both phones. However, rumors suggest that Micromax intends to be aggressive with the pricing. Therefore, we expect the In 1A to have a price tag of around INR 7,000. As for the In 1 model, Micromax will probably keep it at around INR 14,000 price range.

The phones will come with two color variants – white and green from what we have seen in the official video. Sharma also affirmed that both the phones would feature a cross pattern etched into their glass finished back. The company aims to go with a sleek and attractive design for both In 1 and In 1A.

Thus far, we don’t know much about the phones’ specifications. Still, Sharma has revealed that In 1A and In 1 will be powered by Mediatek Helio G35 chipset and Helio G85 chipset, respectively. Micromax might further couple it with 2GB and 3GB RAM variants along with different storage options. Moreover, Micromax has also confirmed that the In series would sport a 48MP quad camera module at the back. Although, we don’t know whether both the In series models would have the same camera. The phones will also have a punch-hole selfie camera at the front, though its specs are unknown at the moment.

The new handsets from Micromax are aimed at different segments of the market. So, it is quite evident that they would have different specifications and performance quality. However, the company has not revealed how different the models will be.