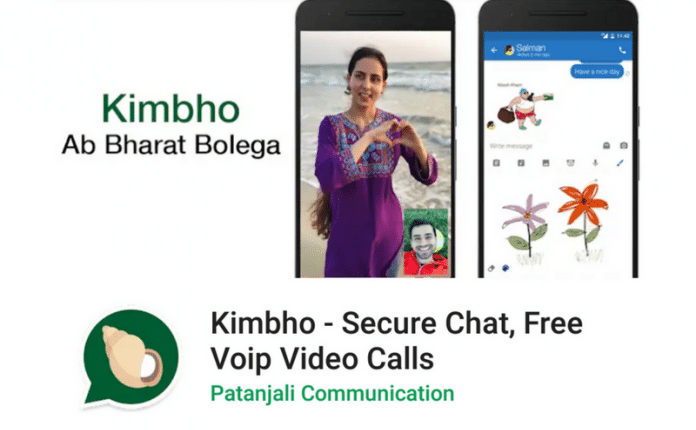 Kimbho is an application which is similar to that of Whatsapp. The Kimbho App will be launched by Baba Ramdev and Patanjali. Recently Baba Ramdev launched the Swadeshi Sim cards to offer a challenge to Jio. Now Baba Ramdev is on his way to challenge the supremacy of Whatsapp by launching the Kimbho.

The main motto of the Kimbho app is that “Ab India bolega”. It operates n a similar manner as that of the Whatsapp. Mr. Tijawarawaja is the spokesperson of Patanjali. According to him, the kimbho is a Sanskrit word. The meaning of Kimbho is “How are you? What’s new?”

The main motive of Baba Ramdev and Patanjali is to start all new in India and to compete with the hugely popular Whatsapp. The features are not ordinary and will surely seek the attention of all the users.

Just similar to that of Whatsapp the Kimbho-app will provide the users to chat with people personally and it will also allow the users to talk in groups. This is not it, Kimbho is offering an extra benefit which can cross the features of Whatsapp and may be liked by a number of people. Kimbho app will allow their users to follow celebrities on the desi platform of messaging. This is an extra feature which can be proved to be beneficial to the user.

The Kimbho-app is claiming that it is having the AES encryption. This AES encryption will ensure that the conversation among individual or groups will remain personal and private. Another point which may be useful to the users is that the Kimbho app will not save any data of the users on the servers.

The easiest way to make it popular is that they have made the availability of Kimbho app on both Android or Google Play Store and as well as on the iOS App Store. You can easily avail the Kimbho app now. For the past few days, the Kimbho app has received a total of thousand downloads. They are looking forward to increasing the market. Baba Ramdev and Patanjali are looking forward that it hits download of more than millions and becomes popular as that of Whatsapp.