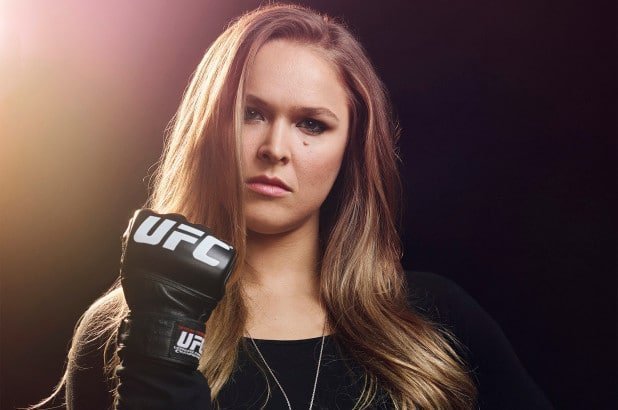 The former undisputed Women’s bantamweight champion Ronda Rousey finally sealed her entry inside the WWE Ring during a contract signing occasion in the Elimination Chamber’s match main event. Beause it’s the WWE no signing goes down with at least one person getting a body slammed and sadly this time it was WWE’s COO Triple H who faced the brunt of Rousey.

Rowdey Ronda Rousey the way her name is announced in the Octagon, she shares her nickname ‘Rowdey” with that of WWE’s very own legend Rowdy Rody Piper and it was Piper who gave his consent to use his nickname which coicidentally her friends used to call her.

Outside WWE, Ronda is a decorated Judo champion with multiple titles to her name an olympic bronze medalist and the first ever UFC women’s bantamweight champion. She defended her title  for an undefeated record of 12 times in a row. To this day her MMA record stands at 12 wins and 2 losses. Nine of her wins came from submissions.

There was speculation in the social media about Ronda Rousey’s entry into Professional Wrestling, At Wrestlemania 31 in 2015, Ronda made a brief Cameo in the event after teaming up with the Rock as the pair attacked Triple H and Stephanie.

With her successful run in MMA will she be able to emulate the same line of success in her WWE run? Only time will decide as she is said to be performing her debut match at Wrestlemania 34. Her opponent on the other hand has not been finalized yet, but there are a few speculations like, the WWE Raw Women’s champion
Alexa Bliss or Smackdown Women’s Champion, Charlotte Flair.

However there are those questioning Ronda’s current status as an entertainer, doubting if she will be able to bring in the numbers to her side. Ronda lost two of her last fights in brutal fashion. Both the matches were viewed by millions all over, tarnishing a part of how many viewed her as the best female fighter in the world. But all is not lost yet, till now none in the female roster be it Strawweght or Featherweight has been able to accomplish the feats she has accomplished, be it in the octagon or the Judo mat. Ronda is currently married to Travis Browne,  an MMA fighter himself

Anthony Joshua to defend his heavyweight titles against Oleksandr Usyk