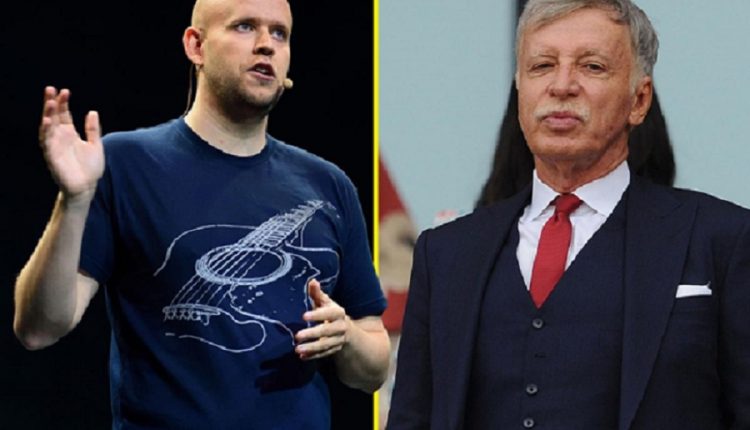 Since Arsenal made the UEFA Champions League final in 2006 under the guidance of the then Arsenal boss, Arsene Wenger, Arsenal path has been going downward and while many believed that it has been the coaching principle that led the club down, some believed that the management is the sole problem of the teams as the retardation is as the result of the management function which is spare headed by Stan Kroenke.

Many ex-Arsenal’s players has always had their say about the way the club is been run and why many believed that the club should be run properly as a sport organization, it has however been managed as a business organization which is born to only make profit for the management and Kroenke is the fore once again.

At the end of the road to amplify the fortune for the management, Stan Kroenke did not think twice in joining the proposed European Super League. But amid the fallout from the immaterialized Super League project, the co-founder of Spotify, Daniel Ek has publicly expressed his interest in buying the North London club while he further assured the fans of returning the team back to his former glory.

Moreover, behind the curtain of takeover lies the wish of many Gunners fans all over the world, “the Daniel Ek takeover bid should materialize” as many believed that the takeover of the club from Stan Kroenke will propel the team to the next level which has always been the dream of the many North London Club’s followers and fans across the globe.

Even in their woeful period as they advance gradually in Europa league for their quest to play in UEFA Champions League come next season, Arsenal were tipped by the online sport betting pundits to lift the second-tier European club competition behind Manchester United only but the prospect was cut short with Unai Emery’s Villareal defeat the North London club to book their first ever European final showdown with the Red Devil at the expense of Arsenal’s negligence, which was encouraged by the club management shortsightedness.

According to Thierry Henry, the Sweden international businessman is ready to take over the Emirate stadium club provided Kroenke is ready to listen. While the Frenchman was speaking to the Sky Sport, he emphasized that:

“It is true. Daniel (Ek) is an Arsenal fan – he didn’t say it for any publicity. He already reached out (to the Kroenkes) and said himself that he had collected the funds to make sure that he can put in a good bid. “They now need to listen. A lot of people have been screaming that they want the owner out.”

More so, apart from the takeover bid, does Daniel Ek has what it takes to return Arsenal back to their glory?

The Sweden financial consortium owner has publicly stated his intention to return the Gunners back to their invincible glory as he has begun to work with the club’s legends and most revered players in the history of the club. While the report had suggested that the likes of Thierry Henry who is the club all time highest goal scorer, Patrick Viera who captained the club with solidarity and leadership nuance, Dennis Bergkamp.

Stan Kroenke since his outright leadership at the Emirate stadium club in 2011, he has begot the time to rekindle what is traditionally a title challenging team into a formidable foe on both local and intercontinental front but the North London Club has regress drastically under his stewardship.

While he shows no ambition to ensure that the team return to his former glory, the potentials abound by the team rank in talents has been constrained due to the shortsightedness of the owner

Arsenal under the stewardship of Kroenke since his 66% share takeover in 2011, the team have had the second fewest spending power with a net spend of £409 million behind Manchester United, Manchester City who have double the Gunners net spend in the same time frame, Liverpool, Chelsea who have shared the league among themselves since that time except Leicester City who managed to do the unthinkable in 2016. Most importantly, no team could possibly compete against those who are doubling their expenditure in the transfer market.

More also, the root of Arsenal’s problem is farfetched with the lack of spending on transfers take a long branch of the problem tentacles. Even, not once has Kroenke invested his own money in the team’s progress and this, he has risen his share to 90% in these 11 years since he first acquired share in the club. Also, with an insane match day ticket, the fans have always been bled dried to watch their darling team play on a weekly basis.

The North London club boast one of the highest match day revenue in Premier League with which was confirmed in 2018 that the Gunners figures, while the club’s exuberant high-end ticket is as high £2995 with low budget hospitality package, the match day fans of the club have always had to endure the harsh sighting from the owner of Arsenal but with the change in power era, there can be a fresh breath of air in the club’s management.

The Club’s chairman, Sir Chips Keswick had to earnestly defend a £3 million pounds strategic and advisory services payment made to him in the Kroenke profligacy stunt that even further enraged the fans on how the owner pull stunt to protect their income and interest from the backlash of the public protest when such moves barely need a camouflage to enclose their intentions. Moreover, the fans are powerless and can only be forced to pay any amount see fit by the club owners to watch there darling after all. And the arsenal situation has become sore to that the reference a wealthy bully buying a simple attire for his wantaway wife out of desperation.

However, as fan of the club who had always wish his darling club to succeed and compete at the highest level in the game, Daniel Ek wouldn’t mind going on toe-to-toe with the Kroenkes to return the team back to his invincible cadre.

To show his worth and ambitions, the Sweden international has begun to work with the past legends of the club to ensure that all right reason and management structure are put in place provided Kroenke decided to listen to his offer in order to create a sporting project that could last more than a decade.

Although like Stan Kroenke, Daniel Ek is also a business man who value profit and to be the owner of a financial consortium comes with a mind that always want to make more profit. But as a fan who has the sight, the resource and the zeal to make his club great once again, he certainly has what it takes to return Arsenal back to their glory days and with the help of the past legends and the management if given the chance, he will definitely return the invincible days back to the North London club.